Meen is a Tamil - movie directed by Hari Bhaskaran Rathinam. 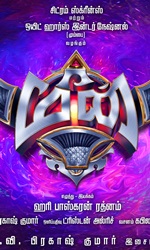 'Taramani' inspired by the world around me: Ram

Director Ram, best known for critically-acclaimed Tamil films such as "Kattradhu Tamizh" and "Thanga Meengal", says his forthcoming release "Taramani" is inspired by everything that he sees around him.Read More