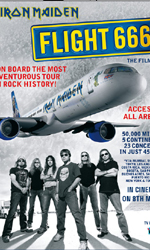 IRON MAIDEN: FLIGHT 666 is a full length documentary film, about the first leg of the band`s historic SOMEWHERE BACK IN TIME WORLD TOUR in February and March of 2008, considered to be the most ambitious and adventurous tour in rock history. The film is a revealing portrait of one of the world`s most successful rock bands and an inspirational and often humorous account of the chaotic world of a band on tour around the stadiums of the world.

Circumnavigating the globe in just 45 days, the band flew in a specially customised Boeing 757 airliner, piloted by lead singer Bruce Dickinson, with the entire tour crew and 12 tons of music and stage equipment on board, to 23 sold out stadium and arena shows in Asia, Australia and North, Central and South America. The band played in 13 countries, also landing in Azerbaijan and Papua New Guinea en route for fuel stops, travelling 50,000 miles (70,000 km) and performing to almost half a million fans - a schedule that was only made possible by having their own magic carpet which enabled them to go where they wanted with all the key elements of band, crew and equipment on board one plane, christened ED FORCE ONE.

Flight 666 gives a close up inside the scenes look at what happened on and off stage, when Maiden gave full access to a film crew for the first time ever, and contains some of the most spectacular live footage yet seen of Maiden. If you want to know what it is like to be part of the most adventurous tour in Rock history, you can`t miss seeing this. Taking you from Mumbai to Santiago, LA to Sydney, Tokyo to San Paolo, Buenos Aires to Toronto and all points between, through exhaustion and fan pandemonium, travelling with band and crew on the plane, to and from shows, in the bar and during leisure time, this really is Access All Areas!!! 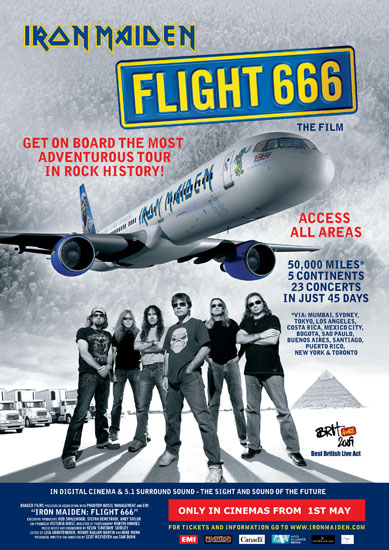