Om is a Tamil - movie directed by . Starring . 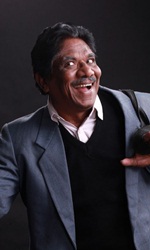 The late Sridevi was on Friday named the Best Actress posthumously for her role as a vengeful mother in the Hindi film "Mom".In the movie directed by Ravi Udyawar, Sridevi played a mother who sets out to avenge her step-daughter, essayed by Pakistani actress Sajal Ali.Sridevi died in February in a Dubai hotel, leaving the film industry, her family members and legions of fans in a state of shock.Read More

Prabhudheva-starrer to have its world premiere in Los Angeles

Prabhudheva-starrer "Mercury" will have its world premiere at The Indian Film Festival of Los Angeles (IFFLA) next month. A masterclass with "The Big Bang Theory" star Kunal Nayyar will also be held at the fest.The 16th edition of the annual festival will take place between April 11-15 here.Read More