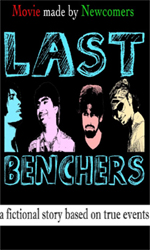 Dipak has a fear of speaking English. Sanket is insecure about his looks. Prashant works in garage to fill his pocket and Prajakt is a college drop-out for whom facing taunts is daily routine. But despite their average looks and no recognition, they enjoy their life.But soon after they finish their college or as we came to know fails in their college life they had a bigger challenge in front of them called “Life”.They have to decide which way to go- conventional way of following line, participating in rat race or to make their own way. But soon life kicks their asses and burns them in hot desert of problems. And when they realize that every student must be facing same problems, instead of giving up, they try to help other students overcome their problems in college life. But life is not that easy, it’s not cream over cake or a catwalk. Will Prajakt and his friends overcome criticism, failure and broken heart?