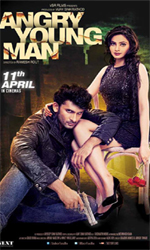 Arjun, a 24 years old street-fighter has gained a reputation of being ‘indestructible’ in the Mumbai Crime World, is a hero in his own right, the sheer capacity of enduring intolerable pain makes him a dreaded figure. His smartness and remarkable fighting style like Rocky Balboa is a scare to his opponents and entertainment to spectators. Beaten and broken time and again he stood up each time, such is his strength and might. Try bending him on his knees and he will bend yours…such was his attitude. Becoming the unbeatable and left with no worthy opponents, he found a worthy recruiter and began working for an Underworld Gang engaged in every unlawful activity with a hope to find the Unknown Enemy in the gangways of crime.

Sarah, an innocent, bubbly, sweet and a chirpy girl. She is a chatterbox who loves to talk. Sarah has just moved to Mumbai and is a neighbour to Arjun. She finds Arjun amusing and gets attracted towards him. She is amazed to see the most dreaded goons of the city bow in front of him with respect. This increases her curiosity about Arjun and she becomes keen to see him fight and is intrigued. Sensing Sarah’s thoughts and with the risk of losing focus in life, he maintains a distance and tries to keep away. But fate had other plans for them. His ignorance adds fuel to fire and Sarah falls in Love with him. Arjun doesn’t reciprocate her feelings.
Arjun’s past doesn’t give him permission to fall in love. When Sarah comes to know about his past, she further falls in deep love with him…..