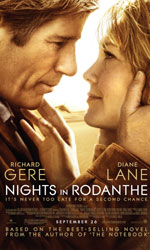 Richard Gere and Diane Lane reunite on screen in the romantic drama “Nights in Rodanthe,” based on the Nicholas Sparks best-selling novel about two people who discover there is always a second chance to find the love of your life.

Adrienne (Diane Lane), a woman still reeling from her husband’s betrayal and struggling to rebuild a life without him, has just learned that he wants to come home.Torn by conflicting feelings, she welcomes the chance for escape when an old friend asks her to manage her inn in Rodanthe for a weekend.>There, on a remote spot along the Outer Banks of North Carolina, Adrienne hopes to find the tranquility she needs to rethink her life.

It’s the off-season and the inn would be shuttered but for the unlikely arrival of its solitary guest, Paul (Richard Gere), a doctor from the city. A man who long ago sacrificed his family to his career, Paul has come to Rodanthe to fulfill a difficult obligation and to face his own crisis of conscience.
They are two strangers sharing the same roof.But as a major storm closes in, they turn to each other for comfort, and set in motion a life-changing romance that will resonate through the rest of their lives.