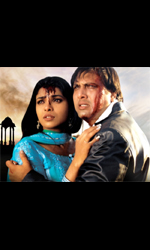 In film.‘Deewana Main Deewana’, Govinda is an easy going person and Priyanka  enters her life.  He wants to win her and for this he keeps mistakes one after another. In order to impress he speaks many lies and she starts hating her... but what happens? Later on is the film all about. Film is being directed by K.C. Bokadia.
On his latest film ‘Deewana Main Deewana” director K.C.Bokadia says, “Govinda and Priyanka looks ravishing together.  Film has everything one wants... comedy, suspense, thriller. The songs “Kala Doriya ….”And “Deewana Main Deewana…..” are good songs. Film was shot at beautiful locations of Jodhpur, Nepal, Jaisalmer, Jaipur , Mumbai etc, which have given a different look to the film.”

The music by Bappi Lahiri & Bappa Lahiri .The film is scheduled for release on 28th September 2012.