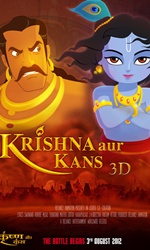 ‘Krishna Aur Kans’- an animated feature film in 3D is based on the timeless tale of Lord Krishna – one of India’s legendary characters from Indian mythology revered across the globe. The film chronicles his early years – from his birth as the nemesis of his evil uncle Kans, to his combat against innumerable lethal demons- who are sent by none other than Kans to kill Krishna. This enthralling film brings to life Krishna’s various adventures and miracles in an aim to fulfill his aim on earth – to put an end to evil.