YOU DON'T MESS WITH THE ZOHAN

You Don't Mess With the Zohan 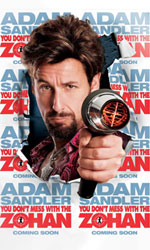 You Don't Mess With the Zohan Synopsis

Columbia Pictures presents, in association with Relativity Media, a Happy Madison production, a film by Dennis Dugan, You Don’t Mess with the Zohan starring Adam Sandler. The film is a laugh riot and also casts talented actors like John Turturro, Emanuelle Chriqui, Rob Schneider and the gorgeous Mariah Carey.

The story of the film revolves around Zohan Dvir (Adam Sandler), an Israeli Mossad agent who dreams of becoming a hair stylist. On a mission to recapture the Phantom, a known terrorist, he takes advantage of the showdown to fake his own death. Armed with his scissors and his coveted book of hip hairstyles, he heads for America. Shunned by the up-tight salons of New York, he makes a name for himself in a lesser-known shop. Word of his extra special attention to detail spreads and soon the ladies start lining up to sit in Zohan’s chair and be serviced. As enemies old and new try to take him out, they all come to learn the same thing: “You don’t mess with the Zohan.”