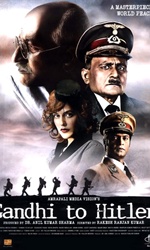 1939 - A world plagued with unrest and upheaval. Adolf Hitler’s ruthless ambition for German expansion in Eastern Europe is becoming increasingly violent and inhuman. Whereas another nation, India, struggles in its fight for freedom against the British as the idealistic Mahatama Gandhi continues to appeal to his countrymen to adopt a stand of non-violence. A stark contrast in ideologies even with an eventual common opponent, Gandhi one day decides to pen a letter to the German dictator… a letter he hoped would persuade Hitler to change his path and avoid the Second World War, avoid the massive calamity that it would bring on.

Gandhi then wrote a second letter to Hitler, this time closer to Hitler’s own downfall, at a time when Hitler was plagued with betrayal all around him while confined to an underground bunker. We witness a contrast in the ideologies of these two leaders and the eminent result of Hitler’s brutal and catastrophic methods.

Dear Friend Hitler looks at Hitler’s downfall, his last days when only his love Eva Braun and his trusted aide Joseph Goebbels stood by him, as the Germany around him crumbled and his trusted comrades deserted him; and through the central young couple Balbir and Amrita we see that the fate of many was determined by the ideology that they chose to adopt.
The film establishes the superiority of Gandhism over Nazism, thereby giving the message of world peace, a message still relevant in today’s context where the world continues to grapple with the dark clouds of terrorism.