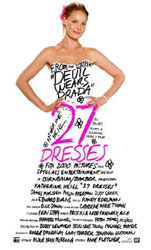 Katherine Heigl, who earlier this year got “Knocked Up” in the hit motion picture comedy from Judd Apatow, and nabbed an Emmy® for her starring role as a surgical resident in “Grey’s Anatomy,” is always a bridesmaid but never a bride in the romantic comedy 27 DRESSES.

From the screenwriter of “The Devil Wears Prada,” 27 DRESSES centers on Jane (Heigl), an idealistic, romantic and completely selfless woman…a perennial bridal attendant whose own happy ending is nowhere in sight. But when younger sister Tess captures the heart of Jane’s boss – with whom Jane is secretly in love – Jane begins to reexamine her “always-a-bridesmaid….” lifestyle.