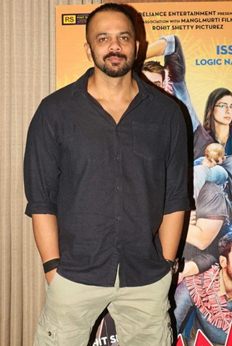 Filmmaker Rohit Shetty, known for his larger than life films with dollops of drama, action and comedy, says he is "scared" of moving away from his signature brand of cinema.

His next is "Simmba" in which the effervescent Ranveer Singh plays a policeman and is paired with Sara Ali Khan.

Known for films like the "Golmaal" and "Singham" series, "Bol Bachchan", "Dilwale" and "Chennai Express", Shetty was asked if he will be able to ever make a small budget film.

He told IANS: "Honestly, I am scared of doing that. If there is a small film with a good story, I will produce it. But I won't direct a small film. See, cinema is larger than life for me and people know my cinema for that. For my audience, watching a 'Rohit Shetty film' is like a festival on-screen. I cannot cheat on my loyal audience."

He feels a responsibility towards his audience.

"I drive an expensive car and live a luxurious life and that has come from the love, support of common people. A middle-class man who is playing 10 per cent of his hard-earned money to watch my film, is making me a rich person. So just to prove a point for my creative satisfaction, I cannot cheat on my audience," he added.

For "Simmba", he has a talented star like Ranveer, who has proved his versatility over the years, most recently with his role in "Padmaavat".

Asked how differently is he planning to present Ranveer to the audience, Shetty said: "We have worked together in an ad film and that is when we started planning to collaborate for a film. But I couldn't have imagined making 'Simmba' if not for Ranveer Singh, because he is the only actor who has the strength to pull out such a character.

"This is the first time we will see Ranveer playing a policeman in an action film. There are certain colourful elements in the character of Simmba that Ranveer also has. So I really had to change my writing if Ranveer would have said 'no' to my film.

"There is a lot of energy in the character, so as in him," added the commercially successful director, whose "Singham" film franchise has been taken forward for a TV format.

His banner Rohit Shetty Picturez in collaboration with Reliance Animation has launched a new kids show "Little Singham" on Discovery Kids. It will go on air from April 21.

The show is inspired by the character Bajirao Singham from the film.

Shetty said he never imagined the film will become so huge not only at the box office but also among children.

"I remember there was four months off after the shooting of 'Golmaal 3' and 'Bol Bachchan'. I just wanted to do a small budget action film with Ajay Devgn, so I told him. He said 'Yes, let's do this'. But never had I ever imagined that 'Singham' would become such a kids' favourite character.

"Since my comedy films were doing well at the box office, many people thought I have gone mad to do an action film. It was a risk. In fact, I remember I told my team that 'Look, if this film fails, we have 'Bol Bachchan' and 'Chennai Express' to fall back, so let me just do it.' Then it became a mass hit."

The animated version of "Little Singham" will have short stories in each episode. It is very different from the original script of the film.

Explaining that, he said: "Here we are targeting audience between 5 to 11 years old. So the subject of stories will be of their age groupm but here Singham is a policeman with all the good habits of the character that he had in the film. He is helpful, active, honest... It is pure children's entertainment," Shetty said.

Would he consider making a children's film in future?

"Well kids like watching superheroes and getting a budget of that is surely a task. The film budget matters because they are exposed to world entertainment and international superheroes. Unless they get to see the same, they won't be interested.

"Having said that, I think our budget is developing and soon we will have enough budget to make a superhero film," he said.