The 50's was undoubtedly the golden era of Hindi films blessed with directors and artistes who could stamp their individuality in their work.. one such personality who carved a niche for himself as a director, actor and producer in the decade, was Guru Dutt Shiv Shankar Padukone or more popularly known just as Guru Dutt. His films had a uniqueness- a brooding intensity about it that a single frame of his work could identify its creator. Ironically his films earned recognition and interest much later in the 70's and the 80's and even now his films whenever they are re- released run full houses. 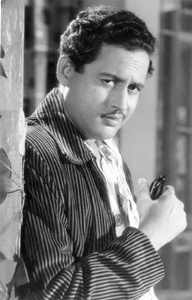 Guru Dutt was born on July 9, 1925 in Bangalore, Karnataka to a middle class Brahmin Saraswat family from Mangalore. His father Shivshanker Padukone worked as a school headmaster and then in a bank in Bangalore and his mother Vasanthi taught in a school, gave tuitions and also wrote short stories and translated Bengali novels into Kannada. Vasanthy was only 16 when Guru Dutt was born. He had a tough childhood with financial difficulties and the strained relationship between his parents worsened the situation. As a child he had bad experiences;  the hostility from his mothers brothers family, a frightening encounter with an insane uncle and the death of his seven month old brother. Young Guru was maybe effected by it all which may explain his introverted nature, later reflected by the tortured characters in his films. He had two brothers and two sisters. One of his brothers Atmaram became a producer and director later in life and his sister Lalitha Lajmi a famous painter.

Guru Dutt's family moved to Calcutta and he had his basic education there. Financial constraints did not allow him to study further than matriculation which he completed in 1941. Guru was creative from a young age, was interested in photography, had a natural inclination for dancing & emoting and loved music especially Hindi and Bengali folk film music. Guru Dutt joined the 'Uday Shankar India Culture centre' in Almora on a five year scholarship with the help of his uncle B. B Benegal who was a pillar of support financially and was an artistic influence to the Padukone kids. In between Guru took up a job as a telephone operator in a mill for a short spell of time. Gradually Guru Dutt began to organize his own dance compositions.

After his dance training at Almora, he got a break in films as a dance director on a three-year contract at Prabhat films, Pune. Along with choreography he assisted directors and even acted in small roles for some films at Prabhat. In 1944, he acted in a small role as Sree Krishna in 'Chand', in 1945 he acted as well as assisted director Vishram Bedekar in 'Lakhrani' and in 1946 he worked as an assistant director and choreographed dances for the film ' Hum Ek Hain'. Then in 1947 he assisted Director Anadinath Banerjee for the film 'Mohan' produced by the Famous Pictures and Studios at Mumbai.

After his contract with Prabath was over, Guru Dutt returned to his family in Matunga. He was out of work for almost a year. During this time, Guru Dutt who had a flair for writing in English used to write short stories and send them to Illustrated Weekly for publishing. It was then that he wrote his first draft of 'Pyaasa' (Thirst) which was later to become one of his masterpieces. He then managed to get a job as assistant director to Amiya Chakravarthy, a leading director at the time in his film 'Girls School' and in 1950 he assisted Gyan Muherjee in Bombay talkies film 'Sangram'.

Finally in 1951 he was called to direct his friend Dev Anand's second production 'Baazi', a crime thriller based on a promise made when they worked together at Prabhat, that he would give a film produced by him to Guru for direction. Baazi was a huge success and was a trendsetter for several similar crime films that followed.

It was during the recording of the song ' Tadbeer se bigdi hui' of 'Baazi' that Guru Dutt met the famous playback singer Gita Roy. There blossomed a romance between them which culminated in marriage on 26 May 1953 at Geeta’s mother’s home in Santa Cruz, Mumbai. The couple had two sons Tarun and Arun and a daughter Nina. But by 1957, their marriage was on the rocks. They were not at par intellectually and Guru being a workaholic was not meant to have a family or to take the subsequent responsibilities. Dutt's alleged affair with his leading lady Waheeda Rehman also worsened matters.

As a director Dutt was a perfectionist who never compromised on quality. He was a genius who created a unique atmosphere through his sense of music, unique picturization of songs, subtle but intelligent dialogues, novel themes, depth of his characters, excellent use of lighting with light and shade, and superb shots sometimes followed by close ups of actors highlighting their expression which go beyond their narrative function and makes an impression of their own. He was also the one to introduce the use of long focal-length lenses, and 100 mm as 75 mm for close ups in Indian films.

The decade of the 50's and early 60's saw him as a director as well as an actor and producer for a number of films. After the success of Baazi, he directed 'Jaal' (1952) another success especially in the picturization of its songs, then 'Sailab' (1956) which was a flop, and also acted, directed and produced; 'Baazi' (1953) which was his first film as an actor but a great flop except for its songs which became popular; then 'Aaar Par' (1954) and 'Mr and Mrs 55' (1955) categorized as his comedies which had a slick pace and intelligent banter especially the latter where the heroine (Madhubala) is a woman struggling for independence and her rights; and then came 'Pyaasa' (1957) a real masterpiece which elevated him to the height of his career in which he played the introverted poet Vijay. Technically the black and white shots in the film depicting the dark moods were perfect. His next and the last movie as a director was 'Kaagaz ke Phool' (1959). Technically, the film was perhaps his best draw, with some remarkable visuals which was lyrical and poetic but it failed miserably at the box office. He also lost heavily financially and a dejected Dutt never directed a film again.

But soon after he produced and acted in 'Chaudhvin Ka Chand' (1960) based on Muslim culture of Lucknow and got it directed by Saddiq Sahib which was a huge success. Then the impressive ' Sahib Biwi Aur Ghulam' (1962) which won the Presidents silver medal as well as the Film of the year award from the Bengal Film journalists Association besides going to the Berlin Film Festival and being India's official entry for the Oscars. He passed away during the making of the film 'Baharein Phir Aayengi' which was completed by his brother Atmaram with Dharmendra in the lead.

Along with his own productions, Guru Dutt acted in outside productions like Twelve o'clock(1958), Sautela Bhai (1962), Bahurani (1963), Bharosa (1963), Suhagan( 1964), Sanjh Aur Savera etc. with almost all the famous heroines of the times. In 1952, days before 'Jaal' was released Guru Dutt had started a production company in partnership with Haridasrshan Kaur, actress Gita Bali's elder sister but they separated soon after, due to heavy financial loss after Baaz (1953). With Aar Par he started his own production company and a studio later and produced many successful films, one was CID (1956) in which he introduced Waheeda Rehman and then in many movies thereafter. He was incidental in making her a big star.

Even though he had his share of success and failure in his work, his personal life was in a mess. By early 1964, he was separated from his wife and was living alone and had also started drowning himself in alcohol. On October 10, 1964 Hindi film world suffered a great loss...Guru Dutt at the young age of 39, succumbed to an overdose of sleeping pills although doubts still linger as to whether his death was accidental.  The prevailing magic of his films even now decades after his tragic end, testifies the skill of this genius who lived much ahead of his times...