If you stay silent, you lose right to complain: Govind Nihalani 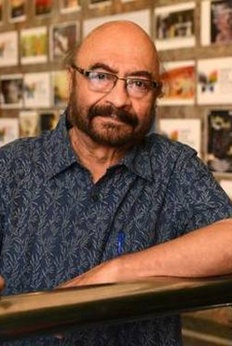 September 10 , 2017 Veteran filmmaker Govind Nihalani, best known for rousing socio-political movies like "Ardh Satya" and "Aakrosh", raised pertinent questions once again with his Marathi film "Ti Ani Itar", about people debating whether to raise their voice against violence or not. The 77-year-old auteur says in real life, if people choose to stay mum, they have no business complaining about it.

"Ti Ani Itar" (she and others), which features Sonali Kulkarni and released in July, is based on Manjula Padmanathan's play "Lights Out", inspired by a real-life incident that took place in a suburban train in a metro city in the 1980s.

While the film is based on a play and an incident which took place 37 years ago, the message and the situation unfortunately seem to be the same today, says Nihalani, who, in fact, believes it has become worse now.

"In bigger cities as the population increases, rough elements increase. Police becomes less and less effective. Corruption goes up. But the fact is all that is no justification for keeping quiet."

"Somebody has to say, 'Yes, I will support you if you are going to expose the wrong, I will support you. If you want some kind of evidence I would give it'," Nihalani told IANS on the sidelines of LIFFT India Filmotsav 2017 here, where "Ti Ani Itar" was the closing film of the festival.

"The point is, you have to believe in people, you have to step forward and say 'I will give you the evidence'. And if somebody says, 'Stop or else I will kill you', is she still going to take one step and complete the promise? That is today's time," added the six-time National Award winner and the recipient of the esteemed Padma Shri, the country's fourth highest civilian honour.

Nihalani's film sheds light on a very common mentality of turning a blind eye and becoming deaf to when evil strikes. He says "courage" is the key to it all.

"In these times, there are no easy solutions. It is about finding courage. Go to the police, do something... At the end, you should have courage as a principle. Don't ask for solutions... Solutions are all there. The law is there, government has provided that, the police has provided that. If we don't have courage, then we cannot complain," said Nihalani, who became known for his fearless filmmaking in the 1980s.

Asked if the police can truly be trusted in reality as his film also captures the element where the police official is trying to brush the incident under the carpet, Nihalani stressed firmly on the word "courage" again.

"Precisely... In spite of that, the character goes to the police and does his duty. So, there are levels and levels of complications. Ultimately, it all boils down to individual courage. That is the only solution. Silence is certainly not an option. If you be silent, then you suffer, then you lose the right to complain. And this has always been the problem," he said.

The filmmaker says the attitude where people "keep thinking that the government won't do anything, then we stay silent and say nothing, do nothing about it", is pointless and wrong.

"A complaint should not be stopped. Do it numerous times till it happens (action is taken)," he stressed, reminding of the Jessica Lal murder case wherein justice was meted out as "complaining did not stop".

As for "Ti Ani Itar", he says it's not an easy film to digest.

"The end cannot have a song or end on a happy note. This not a happily ever after film because in reality it doesn't exist. If I have to make a rom-com, I will make it really happy in the end."