Why can't half the films be made by women?: Gurinder Chadha 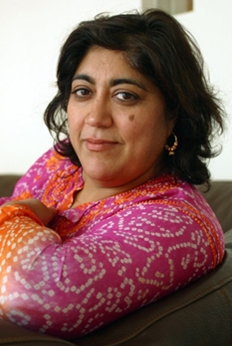 Known for helming movies with strong female characters, Gurinder Chadha expresses dismay at the lack of women filmmakers in showbiz and wants to initiate a "50:50 campaign" to usher in gender equality.

The British film director of Sikh origin, known for films like "Bend It Like Beckham" and "Bride & Prejudice", points out that the film industry is "usually" run by men, and questions: "We are half the population, so why can't half the films be made by women?"

"I think it is very sad to hear the statistics (about lack of female directors) especially since my films have made so much money in Britain for the British movie industry. Whether I am an Indian or not, I'm a successful filmmaker," Chadha told IANS on the phone from Mumbai.

"Our industry is generally run by men. It is not like men go out and say, 'Oh we will not make films by women.' I think they are just not open to it," she added.

Chadha says production houses have to join in to pave the way for change.

Be it "Bend It Like Beckham", "Bride & Prejudice" or her forthcoming film "Partition: 1947" (released internationally as "Viceroy's House") -- the films might be narrating stories from different eras and cultures, but the one thing that ties them together is the presence of strong female characters.

Laughing at the observation, Chadha said she doesn't know how to write weak female roles.

The filmmaker, who was honoured with the Order of the British Empire, is working on a project on female infanticide.

Without divulging much about the project, the director said: "It is at the script phase. It is a subject that I definitely want to do something about and I am working on that."

At the moment, all her focus is on "Partition: 1947", which will release in India on August 18. For the film, she has gone back to trace her roots and document events that led to India's partition.

The film narrates the story of the trauma that people went through due to the division, and how it changed their lives.

Taking the lead from Narendra Singh Sarila's book "The Shadow of the Great Game", she has also brought in the British side of the story, and showed what role Lord Mountbatten played in all of it.

The mother of two said it is very "gratifying" to tell this story.

"While growing up, I was near the British perspective where they blamed us for the partition because they said that we started fighting with each other, and Mountbatten had no choice but to divide the country."

But Chadha's mother presented her the other side of the story.

"She said that's how life was for her and then all of a sudden everything was destroyed. She said that they knew that the white people had done some kind of black magic..."

After making the film, Chadha said she can say with confidence that 'gorein ne zarur kala jadu kita si' (white people definitely did some kind of black magic).

Workwise, she is also developing "quite a few TV series, one of which is with BBC on Maharaja Ranjit Singh and his children".

"There are other big dramas also. On the film front, I have a project which is not 'Bend It Like Beckham', but is about an Asian household and a child's dreams. It has nothing to do with football and more to do with music," she said, adding that there is one Hollywood project also in her kitty.