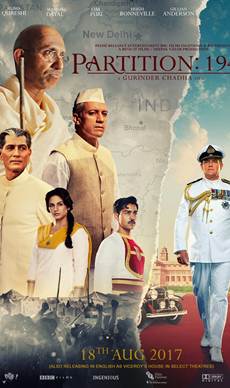 Internationally released as "Viceroy's House", this film gives us a glimpse of life during the tumultuous period before the emergence of India and Pakistan as independent nations in 1947.

Based on two books and inspired from true events from her own family history, director Gurinder Chadha who is known for her film "Bend it Like Beckham", gives us a semi-fictionalised period drama that takes place inside the magnificent Rashtrapati Bhavan which served as the Viceroy's House during British India.

The film begins with Lord Louis Mountbatten (Hugh Bonneville) arriving in Delhi along with his wife and daughter with the task of handing over the reins from the British imperials to the natives, but not before slicing it into two, based on religious beliefs.

While the film captures how Mountbatten is torn between the warring Hindus and Muslims and is used as a pawn, by Winston Churchill, the then Prime Minister of Britain, it also unfurls the romance between Mountbatten's valet Jeet (Manish Dayal), a Punjabi Hindu and Aalia (Huma Qureshi) a Muslim who works as a translator at the Viceroy's House.

The plot is straightforward as it reveals the intense and politically complex series of events that took place over a period of weeks. The harrowing details and unbelievable twists tactfully balances the emotional quotient without tilting the scales or losing key points of the chronicle.

Hugh Bonneville as Mountbatten, Gillian Anderson as his wife Edwina Mountbatten, Neeraj Kabi as Gandhi, Tanveer Ghani as Nehru and Denzil Smith as Mohmammed Ali Jinnah play their roles exquisitely with a depth of sensual warmth and sincerity. Though they play their parts to perfection, they are presented as caricatures, lacking the charisma and charm of the real life characters. And this is the major issue that plagues this production.

The others in supporting roles are realistic and natural. Manish Dayal as Jeet and Huma Qureshi as his reluctant love interest Aalia, are sincere and charming. Om Puri as Aalia's blind father delivers a powerful performance which is evident especially when he is leaving India and realises that his daughter though betrothed to Asif (Arunodaya Singh) is in love with Jeet.

Arunoday Singh as Jinnah's driver Asif and Darshan Jariwala as a Supervisor at the Viceroy's residence, are wasted in miniscule roles.

If you dismiss comparing the main actors' personalities with their performances, the film is astutely mounted. The direction largely quivers between natural and staged. The scope of the production design, though antiseptically prim, gives a fair picture of the era and the scenes especially in the transit camp are emotionally gripping.

Overall, despite its shortcomings, "Partition: 1947" leaves a mark as an engrossing and imposing film.

At the end of Gurinder Chadha's breathtakingly beautiful parable on political propensity, we are told that the director's grandmother was one of thousands of victims of the savagery that followed the Partition of India into two sloppy badly-cut halves.

Thankfully, "Partition: 1947" ("Viceroy's House" in English) is neither sloppy, nor badly cut. Far from it. There is a delicacy and exquisiteness to the storytelling missing in Gurinder Chadha's recent works, especially the hideous "It's A Wonderful Afterlife".

And yes, this tale of history's anomalies is also whodunit. Winston Churchill did it. He was responsible for the Partition of India.

There, I said it. Gurinder Chadha agrees.

There is a wonderful after-glow to this tale that lingers long after it is over. Hugely verbose and yet not the least weighed down by the constant exchange of political rhetorics, this is a film that revels in the its tender moments as much as in its power subcontinental message on what happens to a nation whenA it is divided by the supposedly enlightened Colonists called in to save humanity from damnation.

The elegantly-crafted saga unfolds on two levels of political intrigue. On one level, we have Lord Mountbatten (the judiciously cast Hugh Bonneville) and his sagacious wife Lady Edwina (Gillian Anderson) arriving in India to sort out the mess that the Britishers have created over 300 years. On the other native level, a fantasty-fuelled romance unfolds between a Hindu orderly Jeet (Manish Dayal) and a Muslim girl Alia (Huma Qureshi) working for the Mountbattens. They have a history. So does the film.

While the map-changing politics of the Mountbattens conveys a certain strength and power of its own, it is the Alia-Jeet love story that had me gripped. The idea of love during times of ravage and war is very David Leanish. That Chadha manages to pull it off is entirely due to her closeness to the trauma that defined India's division into two messy halves. Yet, Chadha is able to pull back from the trauma and give itA a hue of dispassionate humour and warmth. And yes, also a feeling of political correctness.

The film is superbly shot by cinematographer Ben Smithard whose lenses explore the wide vistas not for impressive visuals, but to seek out the human face of a political tragedy so immense that it continues to resonate on the politics of the two countries.

One of the many pleasures of watching Gurinder Chadha's Partition tale -- easily her best work since the career-defining "Bend It Like Beckham" -- is to take in the talented cast's character-assuming expertise. Hugh Bonneville lacks the magnetic charm of the real Mountbatten. But he more than makes up for it with his understanding of the anguished dilemma that Mountbatten went through.

But it's Gillian Anderson's Edwina Mountbatten who in many ways, holds the plot together. As played by this accomplished actress. Edwina comes across as compassionate, caring and politically well-informed.

In brief, the perfect Lady Mountbatten.

Can't express the same level of satisfaction watching the actors playing distinguished political leaders. Specially disappointing is the usually-brilliant Neeraj Kabi's hammy Mahatma Gandhi. Every time he opened his mouth, I squirmed. Made me miss Darshan Jariwala's Gandhi in Feroz Abbas Khan's film. Darshan by the way, has a minuscule role in this film suffused with characters who walk in and out of a crisis that not even God could resolve.

Om Puri in a relatively minor role is, his usual impressive self (God, how we miss him!). But among the Indian actors, it is Manish Dayal and Huma Qureshi who stand out with their supple interpretation of love over the religious divide. This is Huma's best performance to date.

Chadha is specially skilled at putting forward the sudden flare-ups of temper among Mountbatten's staff. Specially shocking is Muslim staff member spitting on and hitting his elderly White senior. Chadha sees the tragic waste of the Partition in such incidents. She waltzes over the welters of history's lessons, creating a fabulous pastiche of pain and passion without tripping over into either emotional condition.

This is a history lesson well served and waiting to be seen.

'Partition: 1947' banned from release in Pakistan

Filmmaker Gurinder Chadhas "Partition: 1947" -- the Hindi version of period drama "Viceroy's House" -- has been banned from releasing in Pakistan, reportedly over "misrepresentation" of Muhammad Ali Jinnah. The director says it's unfortunatRead More

Megastar Amitabh Bachchan has said that he is working on videos for Prime Minister Narendra Modi's Swachh Bharat Abhiyan and the Consul General of India in Brazil, for an ongoing festival.Read More

Directed by Gurinder Chadha, PARTITION: 1947 tells us the untold story behind Partition.

After 300 years, the rule was coming to an end. The rule of the British!! For six months in 1947, Lord Mountbatten assumed the post of the last Viceroy, with a responsibility of handing India back to its people. Viceroy’s House (now Rashtrapati Bhavan) in Delhi was the home of the British rulers till then. As the political elite - Nehru, Jinnah and Gandhi - converged on the House to wrangle over the independence of India, a conflict erupted. A decision was to be taken to divide the country and thus emerged a conspiracy & a love story followed by untold events between our Indian political leaders and the British Raj driven by political duplicity. This Independence Day discover hidden facts & unmask the biggest conspiracy in the History of India. 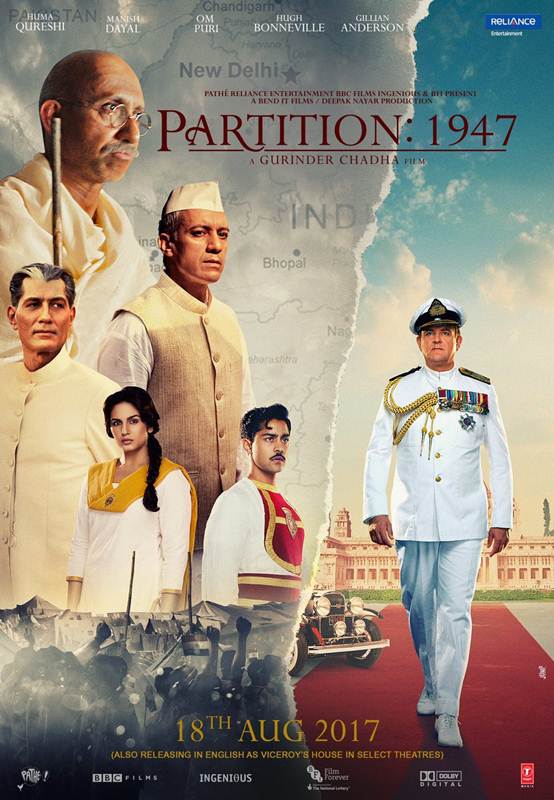 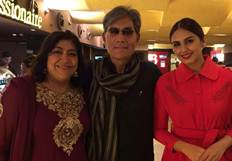