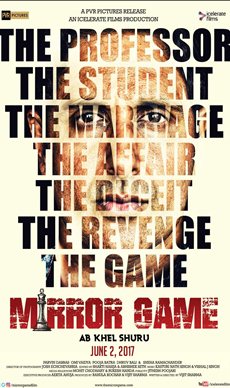 Nothing, absolutely nothing, in the psycho-babble that governs this tragic and cocky homage to Alfred Hitchcock warrants our serious attention. The characters, played by a bunch of jobless NRI actors in the US and our own Parvin Dabas (who deserves better) look sufficiently solemn as they try to look like a part of a great big murder plan, something on the lines of "Dial M for Murder". Except that the 'M' here stands for moronic.

The plot, trying hard to be slick, savvy and suspenseful, comes apart at the very outset. Our hero Jay Varma (Parvin Dabas) who teaches psychology in the US, is a troubled man with a history of mental disorder including schizophrenia. Who would want to learn about the mind from someone who has lost the plot?

What the script, too clever for its own good, refuses to tell us is that Jay has probably watched "Dial M For Murder" more times than M.F. Hussain had seen "Hum Aapke Hain Koun..!" Hence, Jay feels the way to get rid of a scornful nagging wife (who sneers so hard that we fear her lips may fall off her face), is not divorce but... murder.

He asks an eager student Ronnie (Dhruv Bali) to bump off the nagging wife.

Perfect Murder, anybody? Now Ronnie has his own game plan. So does the friendly shrink Dr Roy (Pooja Batra) who thinks she knows it all. In fact, everyone acts wise. Only the makers of this film seem happy being caught as dumb.

Try this for criminal idiocy. Jay's unconventional route to spousal nirvana is shared by our troubled hero with his pal Vikram (Omi Vaidya, looking so rusty that it's like Chatur's chamatkaar has undergone a balaatkar). Anyone in Jay's place would keep his big secret to himself. But Jay doesn't mind sharing it with anyone who cares to listen.

Soon (but not soon enough), an Indian detective Shenoy (Sneha Ramchander, apparently every other citizen in New Jersey is Indian), shows up at Jay's doorstep.

"This looks like a case of a missing person," she says when she finds the wife missing.

Brilliant minds at work here, I must say.

The plot thickens to a gelatinous mass of uneven ingredients culminating in a disproportionate dish of diminishing savouriness. The performances are uniformly hammy. The script tries to run so ahead of the audience that it finally collapses of exhaustion.

The non-Indian cast has to be seen to be believed. Reason enough to give the American Dream a nightmare.

International viewers 'jilted' to know we lip-sync to songs in Bollywood: Pooja Batra

Model-turned-actress Pooja Batra, who will soon be seen psychological thriller "Mirror Game: Ab Khel Shuru" and has acted in an international film, says audiences abroad feel a little jilted to know that in Bollywood, actors do not sing in real but there is a playback singer.Read More

Was never desperate to get success in cinema: Parvin Dabas

Actor Parvin Dabas, who will soon be seen in a psychological thriller "Mirror Game: Ab Khel Shuru", says though he has worked with different directors and explored various genres of film, he is not aggressive about chasing success in mainstream cinema as he is quite content with his work.Read More

The Mirror Game is a Hindi Language Bollywood psychological thriller. The film’s title is inspired the mirror game, widely known from V. Spolin’s seminal book Improvisation for the Theater where two people improvise motion together. The title is a symbolic reference to mental health issues like schizophrenia and multiple personality disorder that form the central theme of the film.

The film follows University Professor Jay Verma. Stuck in a crumbling marriage and a failing career, Jay seeks a way out of his troubles. Ronnie, an ambitious student, approaches Professor Verma asking for help with a thesis. Verma sees this opportunity and in return for his help, makes Ronnie an offer that he hopes will solve all his problems. Ronnie accepts but soon things start to spiral out of control and Professor Verma begins to question his own sanity.

The film has been produced in association with Swen Entertainment (Pvt) Ltd., Industrywalas, Rolling Box Films and Diamond Films. 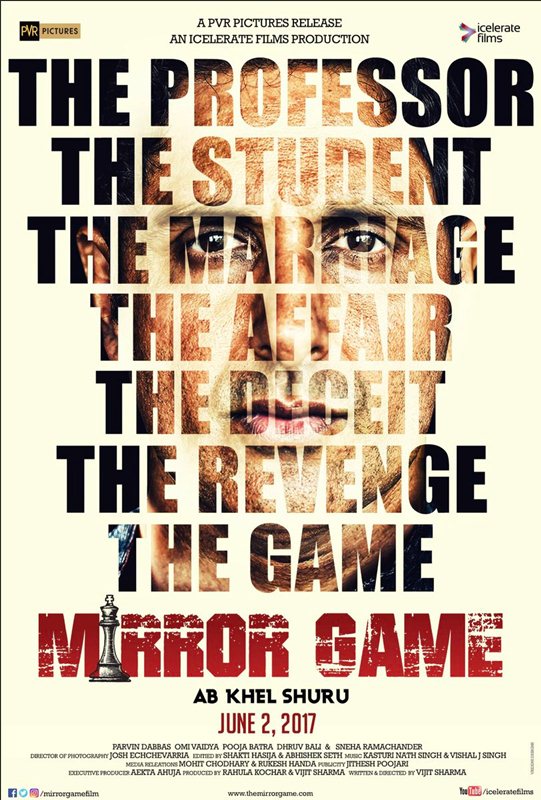