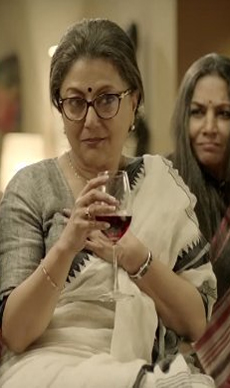 'Sonata': Misses the beat of an art-house film (Review By Troy Ribeiro , Rating: **)

Based on a play by Mahesh Elkunchwar, "Sonata" celebrates womanhood and explores the friendship among three single middle-aged friends from college, Dolon Sen (Shabana Azmi), Professor Aruna Chaturvedi (Aparna Sen) who share an apartment while their third friend Subhadra Parekh (Lillete Dubey), is currently away living with her boyfriend Sangram, a garage owner.

Set in their swish apartment in Mumbai, the film touches upon issues which afflict women of this age - loneliness, sexuality, past relationships, impending old age. While Dolon, who works as a HOD in a multi-national bank, is a free-spirited Bohemian, who is an epicurean and enjoys her food and wine and even sexually explicit talk, Aruna is the prude. She abhors talk about physical relationships, does not drink and disapproves of live-in relationships and is happier off with her college students and her Sanskrit scriptures. Subhadra on the other hand is a liberated woman, a journalist, but at the same time allows herself to get beaten up by an abusive boyfriend.

Largely through conversations one evening at home, between Dolon and Aruna, Sen lays bare these issues, albeit several times in a forced and contrived manner. The bai for instance takes leave stating that her daughter is pregnant but not before taking a dig at the two single women that they wouldn't understand a thing about motherhood.

Another friend of theirs, Mira, who undergoes sex reassignment surgeries, is used as a reference to put forth the cause of transgenders and their right to freedom.

The dramatic moments are few and far between and the sporadic humorous lines too few to provide relief to the tedium. The film drags in parts although the conversations at times are insightful.

With a spirited and spontaneous performance from the articulate and expressive Shabana Azmi as Dolon, complete with her rendition of Rabindra Sangeet in flawless Bengali, Sen is unable to lift the basic tenor of the film which is very theatre-esque and thus becomes tedious to watch after a point. With a staid camerawork, the setting too gets monotonous, although she briefly uses a flashback and also a skype conversation, both of which appear forced and do not help.

Aparna Sen as Aruna is a bit of a misfit in terms of her UP accent, but performs with restraint which is in keeping with her character. Her expressions are measured and she never lets down her guard. Her chemistry and camaraderie with Shabana Azmi is palpable throughout. Lillete Dubey in a cameo, lights up the screen with her effervescence as always, but is a bit stereotypical.

The background score uplifts the mood of some scenes and has been used effectively.

Overall, "Sonata" misses the beat of an art-house film.

Except for one of the women landing up with a black eye and another making a shocking announcement at the end of this enchanting chamber piece -- a sort of Beethoven for the sexually impaired-nothing really ‘happens' in the 90-minute celluloid discourse on post-menopausal sexuality and other related topics on how to be a woman past her prime,without guilt and the accompanying crimes.

A lot of the recriminations and remonstrations that are thrown back and forth between Shabana Azmi and Aparna Sen are self-consciously stagey, like two people, two women , who have been so close to one another for such a long time that they can afford to ‘act' in front of one another without the risk of being misconstrued or causing permanent damage to their mutual relationship.

The fact that Shabana and Aparna have been friends in real life for as long as they are shown to close in this film, helps imbue their characters and their shared relationship with a warmth and whimsy that are the opposite of social etiquette and flimsy. These women can put their feet up on the table, belch and fart, and bitch their hearts out.

The kind of infinitesimal caprice that Shabana brings into her character shows how on top of her craft she continues to be even after so many years.This is one formidable performance from an actor who has owned every challenging character she has played since Ankur as though genetically attached to it by the hip and lip.

I had some problems with Aparna Sen's Aruna Chaturvedi. Firstly the UP accent sounded like the Ganga losing its way into the Yamuna. Also her repressed act stuck me as innately hypocritical. Aruna, I felt, acted holier-than-thou only so that the drama in the chamber piece between Shabana and Aparna can be heightened and enhanced to seductive decibels. I don't know if playwright Mahesh Elkunchwar wrote Aruna's character that way-maybe he did, maybe he didn't-but Aparna comes across as stilted and repressed.

But what a radiant beauty Aparna Sen continues to be. Oh yes,the camera loves her.And she loves it back.

Lilette Dubey playing a boisterous journalist with an abusive boyfriend joins the two women midway. She is as usual a rabble-rousing life force, breaking into a jig to the sound of Babu dheere chalna…must every onscreen feisty women dance only to that song?....in brief, a predictable misfit.

When together the three women share an easy fluent robust camaraderie that indicates many years of unconditional compatibility. Mid-way through their bohemian fantasies, the tone changes.

Shabana's Dolon becomes more thoughtful, she stops bitching about the woman seen from her window who sits typing on her laptop continuously(perhaps Dolon realizes that for all her hyper-activity her own life is not much different), sings Rabindra Sangeet in an aching piercing voice that conveys centuries of pain hurt humiliation and rejection and finally sits aghast in front of the television staring at images of 26/11.

"Sonata" is exhausting, though in a profoundly satisfying way. Though it remains confined to one room the storytelling is fluid thanks to the unostentatious expertise that the three actresses bring to the dining(and wining, and whining) table.

Aparna Sen's direction here is far more fluid and surehanded than it was in her last, disastrous , outing Arshinagar, a song and dance stage-and-prop artificially-lit version of Romeo & Juliet where everyone sang, and no one did it in tune.

"Sonata" too is based on a stage play. But it isn't stagey. Rather it mines into the lives of women who know when to let the truth spill out and when to doctor it to their own advantage. The result is both delectable and revealing.

You come away from "Sonata" with impressions of femininity way removed from what cinema has taught us over the centuries. From Devika Rani kissing her co-star Himanshu Royu in Karma to Shabana Azmi ogling and giggling at boys on tv in underwears...Lady, you sure have come a long way.

Aparna Sen is ready with her latest directorial venture Sonata, based on the play by the same name by Mahesh Elkunchwar. Sonata is the psychological exploration of three unmarried women namely Aruna Chaturvedi (Professor), Dolon Sen (Banker) and Subhadra Parekh (journalist) played by Aparna Sen, Shabana Azmi and Lillete Dubey respectively. Set in the recent contemporary past, it is about 3 friends, their lives, ups and downs, the men in their lives and a twist in the tale. It is a subtle, cosmopolitan, contemporary, film on women and the uncertainties of life, based in an urban scape.