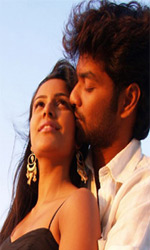 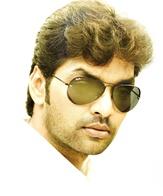 Seemingly inspired by the great mythological character of Vamanan, debutant director Ahmed has dished out a movie that is about an ordinary young man who gets into a tangle and emerges successfully against all odds.

After making a mark for himself by doing a couple of experimental movies, Jai is finally seen in a full-length commercial film that has loads of romance, action and humour.

Right from frame one, Jai makes his intentions very clear, delivering a performance that has influence of mass heroes like Vijay and Silambarasan complimented by his body language and dialogue delivery.

The story of the film is as old as a hill. A prominent minister (Delhi Ganesh) is killed by his colleague and a video tape that captures the crime goes missing. The murderer, who is an influential man in society, searches for the tape in connivance with some policemen.

As it happens, it eventually reaches the hero and what follows is the crux of the story.

Anand (Jai) wants to make a career in acting. He sets out of his village and comes to Chennai. He takes refuge in his friend`s (Santhanam) house, who works as a cameraman with a satellite TV channel.

Anand tries his best to find a chance to enter the tinsel town. One day he comes across John (Rahman), whose antics and valour impress him. And they soon become good friends.

Anand, in the meantime, meets Divya (Priya) at a railway station and romance blossoms between them. He also comes across Pooja (Lakshmi Rai), a model, and befriends her. The twist in the tale is that the much sought-after video tape that captured the minister`s murder by his colleague Anbu Chezhiyan (Sampath) lies with her.

Coming to know of it, the cops and Anbu Chezhian`s henchmen are behind her. One day she gets killed and the blame falls on Anand. He manages to escape from the police and meets John. Only through John, he comes to know about the tape.

Anand manages to get the tape from Pooja`s house after much search. It`s now the cat and mouse game between him and Anbu Chezhiyan before he gets a surprise in the form of John.

Jai manages to leave a mark playing an aspiring actor. In the company of Santhanam, he does evoke good humour. Newcomer Priya plays a typical heroine. She loves Anand, shakes a leg to a couple of songs and disappears suddenly.

Lakshmi Rai plays a role that she has been doing for sometime now. As a model, she wears stylish costumes and even does a pole dance. Sampath, as a menacing villain, is good.

Santhanam walks away with honours. His humour does evoke laughter.

The scene-stealer is cinematographer Arvindh Krishna. His lens captures the wild chase well, besides picturising dry Chennai in a fresh tone. Yuvanshankar Raja`s music is a letdown. The songs are average and give a `heard before` feeling.

The major flaw is that one gets a feeling of dej?u as scenes unfold, especially in the second half. Also, the lengthy second-half badly needs trimming.