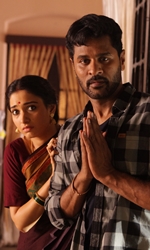 Amy Jackson in a guest appearance

Esha Gupta in a guest appearance

Farah Khan as herself (guest appearance)

`Tutak Tutak Tutiya` is a typical potboiler worth its ticket price. It is a comic love story with a ghost involved.

It is the story of Krishna (Prabhudheva), a guy beyond his prime, who dreams of marrying a `modern girl` but lands up tying the knot with Devi, a `village belle`, against his wishes and how his disgust gradually turns to love.

This may also be an oft-witnessed premise, but the unpretentious and novel treatment of the plot is what makes the film stand apart. The writing is fresh and the narrative is stimulating with realistic performances.

The film is Prabhudheva and Tamannaah Bhatia's canvas. There is no chemistry between them. Yet, they hook you on.

Prabhudheva as Krishna, the 34-year-old trying to hook a girl, is convincing. With a straight face and innocent looks, he is simply natural and impressive as he lives his character to the hilt. His dancing skills are forced into the narrative, but that is expected with Prabhudheva around. What adds to his charm is his flair for comedy.

Sonu Sood, as Raj Khanna the superstar is earnest, but a misfit. He not only looks jaded but he also has nothing much to offer in terms of histrionics.

In cameo roles, there are Amy Jackson, Esha Gupta and Farah Khan.

With moderate production values which are well exploited, the visuals by cinematographer Manush Nandan are aesthetically shot. With fine video effects, the computer generated images integrate seamlessly with the live action shots. This is evident in the scene where Krishna tries to escape from his house and the door panel eerily shifts and rotates, blocking him from escaping and when he does, drops him back into the room.

Overall, while the film is engaging and intriguing, it suffers from a fatigued second half and an absurd ending. But nevertheless, it keeps you in splits. A better star cast would have elevated this film.

`Tutak Tutak Tutiya` is designed as a grand farce where everyone gets to have a wish come true. Prabhudheva gets to try out his doddering comic timing in scenes that are written in mock-horrific loops. And goodness, what is that thick Tamilian accent doing in the Hindi version of a film that has a Telugu and Tamil version?

Farah Khan who thinks she can act gets to play dance-show judge. It's like Arnab Goswami playing a new anchor. Then there is Sonu Sood who gets to play Superstar Raj Khanna.

This is a film that will give you sleepless nights for days to come...That's after you come out of a daze brought on by Tamannaah as she transforms from a devoted domesticated housewife into a slithering hip-shaking lip-pouting diva star as Ruby.

Please note. Good girls wear saris, stay at home to look after their husband's home while he goes out to flirt with women in skirts pretending to be a bachelor . Tammannah who is a competent performer goes from dazed housewife to dazzling film star with as much enthusiasm as a cook moving from brinjal curry to dahi vada.

For some strange reason she is repeatedly shown in a state of just-had-bath with a towel tied around her hair.

Prabhudheva who is a devastating dancer is here cast as a selfish, uncaring husband. He is an office goer who gives his biodata to every single girl hoping she would become his girlfriend. The man is a borderline stalker in this monstrously improper comedy-horror. Prabhudheva is shown bullying, slapping, heckling and haranguing women including his wife. It's a bloody embarrassment for the actor and he looks as though he was being forced to keep a dentist's appointment which he would rather skip.

A broad crass comedy may work if the actors believe in the material, no matter how outrageous it may be. Here in the film, the performers go through the motions as though stuck in the loo with constipation. The odds of their conquering the inertia that is so clearly mapped on their faces remains at the most, bleak.

There is very little in this film to brighten up the proceedings. Unless those rumbustious Bhangra numbers put a beat in your feet. Two of them feature Esha Gupta and Amy Jackson. But don't get your hopes too high. Amy doesn't even dance. She just stands around looking bored watching others shake a leg. This was where I could identify with a character's emotion.

Stay away from this dead meat posing as freshly baked barbecue. Revenge they say, is best served cold. The film serves it piping hot. We, and poor Prabhudheva, must have done something terribly wrong to deserve this.