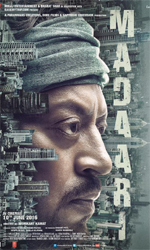 "Madaari" is the moving tale of a distraught common man, a single father Nirmal Kumar (Irrfan) who has lost his son under tragic circumstances, owing to negligence and corruption in the system.

How he resorts to a desperate measure to make his voice heard, in a bid to seek justice, forms the crux of the film.

Exposing the malaise of deep-seated corruption, government apathy and the power of social media in reaching out to people, the film is both, disturbing and hard-hitting. It is a reality check for the electorate and sends out a strong message that the "ideal voter" in India will perhaps no longer tolerate government indifference and demands accountability.

Unlike, other political satires, "Madaari" takes the route of a strong emotionally-packed narrative, well-told. And that, is what perhaps pierces your heart, making you connect immediately. You empathise with the father, even not having experienced his predicament.

Irrfan, as the anguished father, is brilliant. His eyes, with their vacant expression, convey his pain and frustration, with ease. As an actor, he is in absolute command, reliving the grief effortlessly. His pain is palpable. The last scene where he finally severs physical ties with his son's belongings, is heart-wrenching.

Vishal Bansal, as the Home Minister's son, Rohan, is a treat to watch. A combination of spontaneity and restraint, the child exudes a maturity as an actor, far beyond his years. Their bond which builds, gradually, is heart-warming. Equally fun to watch, is their repartee, with startling wise statements made by the child.

Tushar Dalvi as the Home Minister, seen after a long hiatus in Hindi films, is competent, but not extraordinary.

Jimmy Shergill as Nachiket, the Investigating officer, is once again his usual self. A feeling of deja vu pervades you when you see him on screen -right from his physical persona, to his character. Yet, that does not take away his ability as an actor, in performing sincerely.

Ayesha Mishra as the mother, is convincing and delivers what is expected of her.

The rest of the actors too, essay their roles effectively and leave an impact, however limited their screen time, especially the actor playing Chiku's father.

Directed astutely by Kamat, the film is compact and never digresses from the core subject. It is engrossing and powerful. The screenplay is taut and the characters well-etched and real.

"Masoom sa" rendered powerfully by Sukhwinder Singh is emotionally disturbing. It drives home the message of the father's irreversible loss and captures the mood of the film.

The unhurried pace of the narrative, does not seem out of place and in fact gives ample time to let the plight of the father grow. The final face off, although overtly dramatic would incite and appeal to the common man.

With a wide range of lenses, cinematographer Avinash Arun brilliantly captures the locales and finer nuances of the performances.

Overall, "Madaari" is an absolute treat both for cine-goers and every citizen of India, who is concerned about his country.

His core desire was just to sing his heart out, but filmmaker Vishal Bhardwaj, in the later stage of his life, utilised his sense of music in a much meaningful manner in storytelling. Read More

Madaari is a story which could happen to anyone but the means may differ to meet the end. One fine day Nirmal loses everything he has in a man-made disaster, he starts the journey of seeking answers asking for accountability which leads him to a deadly path. The journey brings out the extraordinaire out of an ordinary man, it’s a saga of emotions in a thriller avatar. 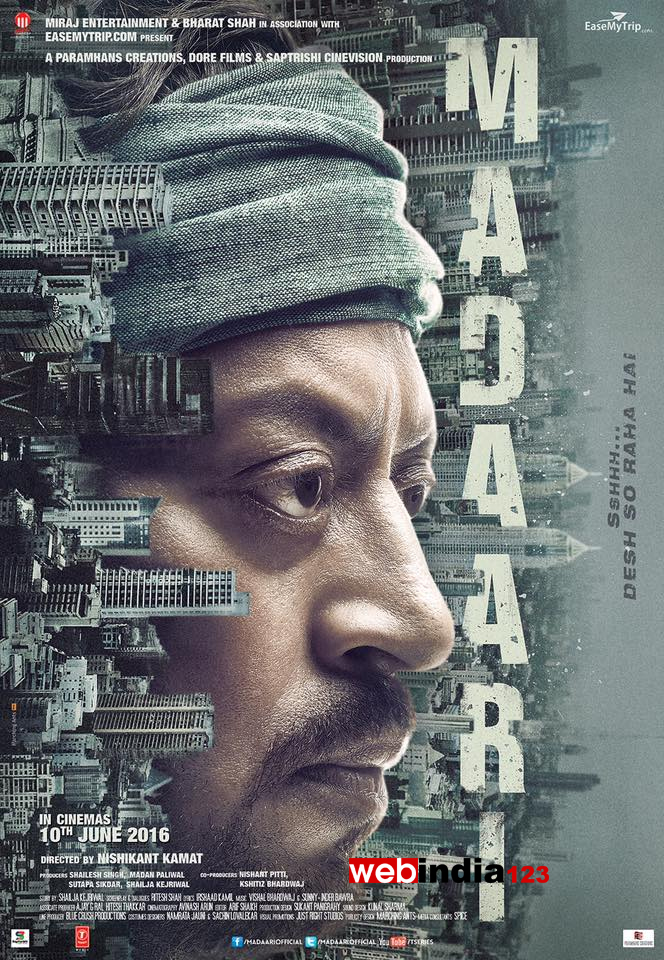