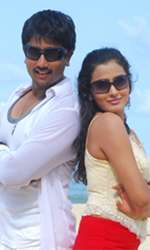 "Abhimani" made news before its release because the protagonist of the film achieves a lot in life as he is inspired by legendary Kannada actor Rajkumar. Director Praveen Engineer had claimed that the graphics work in the climax, where two of Rajkumar`s film scenes are shown, will be a major highlight. So yes, Rajkumar will be seen in the climax scenes through bits of "Daari Thappida Maga" and "Babruvaahana".

In reality the so-called graphics sequences featuring Rajkumar are badly handled and do not gel with the story.

"Abhimani" is a let-down as audiences had big expectations of fresh contents from new directors.

Praveen, who claims to have worked under the guidance of well-known Telugu director Dasari Narayana Rao, has made Telugu film "Missamma", which had the glamorous Mumaith Khan playing a police officer.

But "Missamma" didn`t create any ripples in the Telugu film industry and was criticised for its vulgarity. "Abhimani" is no better.

The comedy sequences of the film are crass. Another weak point is that many artistes either end up overacting or often wear expressionless faces.

The story revolves around Muththuraj, who wants to become a singer. His mother encourages him to take up singing, but unfortunately dies before Muththu realises his ambition. In a sad turn of events, Muththu is diagnosed with tongue cancer, which prevents him from practising singing.

A determined Muththuraj, who is also encouraged by his lover, enters a singing competition and wins in the finals. But he faints while singing the last line. Finally Muththuraj is miraculously cured of his disease. In a dream sequence, actor Rajkumar comes down to meet Muththu to give him a healing touch.

Television anchor Raahul, who has acted in "Nannusire" earlier, has a long way to go. The film`s heroine Nidhi Subbaiah shows promise in her role. Sharath Babu overacts and Srinath does not have much to do. Rangayana Raghu is stuck in a stereotyped role.

"Abhimani" is an ordinary film that can be avoided.