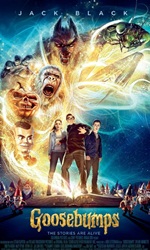 This metafiction, based on R.L. Stine's eponymous bestselling horror tales for children, is a delightfully old-fashioned, monster pastiche, adventure film that is too frivolous and contemptuous to actually terrify anyone.

The film begins with, the not-yet-18 Zach Cooper (Dylan Minnette) and his recently widowed mother, Gale (Amy Ryan) relocating themselves to Madison Delaware from New York, where she takes up a new job as a vice principal at the local high school.

Gale hopes that "a change of scenery will help" her son.

Zach soon strikes a friendship with his next-door neighbour, Hannah (Odeya Rush), a sweet girl who is closer to him in age. But when Hannah's father (Jack Black) catches him talking to her, he warns Zach, "stay away from us or something very bad will happen to you". Zach is baffled and finds her father's behaviour obnoxiously weird and unwarranted.

It is after he suspects Hannah screaming after her father grounds her, he calls the police thinking that she is in dire-straits and is in need of help. The police arrive and Zach is proved that he is wrong.

Not convinced, he ropes in his friend, Champ (Ryan Scott Lee) to investigate Hannah's house, where they inadvertently unleash terror, when they open up the locked manuscripts. The monsters tumble out of the pages and create pandemonium in town. It is then that they learn that the author of these manuscripts is none other than Hannah's father, the recluse Mr. Stine. And the monsters are the creation of his writings, a gift which he claims "is a curse".

The monsters include; a mutant praying mantis, a horde of ravenous zombies, a teenage werewolf, an army of garden gnomes wielding pickaxes, the vampire poodle, the abominable snowman of Pasadena, all led by a vengeful ventriloquist's dummy named Slappy, who gleefully masterminds the massacre in retaliation for being imprisoned in the pages of the manuscript.

Dylan Minnette, Odeya Rush and Ryan Scott Lee, are charming and they make a fine trio in helping Jack Black find a fine balance between being seriously grouchy and going over-the-top. Jillian Bell as Zach's Aunt Lorraine in a miniscule role is simply attractive and funny. And Amy Ryan as Gale, is a stock character hardly contributing to her role and narration.

The concept of the tale is not only interesting but it is also beautifully woven by storywriters Scott Alexander and Larry Karaaszewski, and given shape by screenwriter Darren Lemke. The fantasy twist in the narration is what makes the film fascinating. But unfortunately, the characters are cardboard thin, the sub-plots are not well-explored and the humour seems forced.

On the technical front, the computer-generated monsters are neither spooky nor menacing and the 3D special effects are elementary. Also, the stunningly choreographed mindless-pandemonium flies in a flurry, leaving you hoping for more teeth-biting action and jaw-dropping scares.

Overall, director Rob Letterman's "Goosebumps", with some fine nuggets of direction, is a contrived tale, targeting the family audience this Halloween weekend. It is not too scary for children, but not too tame for the adults either.