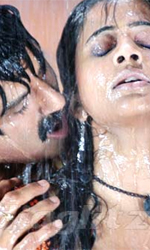 It is a rehash of several Hindi and Telugu films of a `hired` husband who wins his shrew of a wife.

The only difference in this one is that both male and female protagonists are projected as superstitious people wallowing in self-pity and nutty enough to be foxed by amateurish chisellers.

Indu postpones her marriage upon being told by a soothsayer that she would be widowed within a month and marries a stand-in Aditya who actually ends up falling in love with her.

The rest of the gooey melodrama is totally unconvincing.

The limp storyline, listless cinematography and Sharma`s apology for music do not help either.