13 HOURS: THE SECRET SOLDIERS OF BENGHAZI

13 Hours: The Secret Soldiers of Benghazi 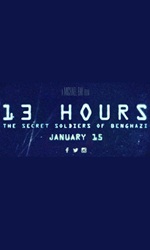 Based on '13 Hours' (2014), a true story authored by Mitchell Zuckoff, the action-film,'13 hours: The Secret Soldiers of Benghazi' chronicles the real life siege of the American diplomatic compound in Benghazi, Libya on September 11, 2012. The film captures the horrific moments of strife with intense reality.

For the uninitiated, in 2012, Benghazi, Libya is named as one of the most dangerous places in the world and countries have pulled their embassies out of the country in fear of an attack by militants. The US, however, keeps a Special Mission open in the city and less than a mile away is the CIA outpost called the 'Annex' which is protected by a team of private security contractors called Global Response Staff, who are made up of former special operations personnel.

The duties of the Global Response Staff is to protect US intelligence operatives and diplomats in the city.

The narration follows the six team members, who despite red-tapism, defend the American diplomatic compound against hordes of Islamic militants and how they were not properly recognised for their efforts.

They are aptly supported by David Costabile as Bob, the indecisive CIA Station Chief, Matt Letscher as J. Christopher Stevens the US Ambassador to Libya, Christopher Dingli, as the Foreign Service information management officer Sean Smith.

Every actor is natural and they get into the skin of the characters with ease.

The screenplay, adapted by Chuck Hogan, focuses mainly on Jack and Tyrone. It barely sketches in the other GRS members. He gives buoyancy to the plot by building tension adroitly. He intersperses tense scenes with personal ones, comprising of family video chats.

The film, directed by Michael Bay who had earlier given films like 'Pearl Harbour' and 'The Transformer' film series, has his stamp written all over the narration. He captures the war-torn state with surreal brilliance and terror is palpable in every scene.

The film effectively captures the frenzy of the ambush with fast razor-sharp edits, stylistic visuals and extensive use of special effects including frequent depiction of explosions. The shooting, the launching of missiles, vehicles chasing and explosions are well captured.

Dion Beebe's cinematography is strikingly brilliant. His camera movements are smooth and extremely focused. Every frame is well-angled and impressive. He captures the vast landscape in day and night shots, as well as the tight close ups with equal brilliance.

The visuals, along with the well-synchronised sound design, is what keeps you hooked to the two and a half hour plus duration span.