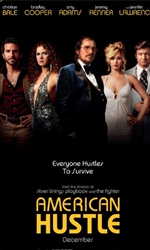 There is a line in the film that goes: "People believe what they want to believe. This is the way the world works. No black and white, always grey." How profound and true!

And by the end of the film, one recalls the very first frame that stated, "Some of this actually happened" in bold letters, a declaration that feels calculated to make the audience believe so.

Filled with outrageously loud grey characters, "American Hustle" is about a highly charged FBI agent who blackmails a small-time fraudster and his mistress into helping him ferret out corrupt politicians from the system. It is loosely based on the Abscam that shook America in 1978.

The film tracks the scandal through the point of view of Irving Rosenfeld and his mistress and partner in "love and commerce" Sydney Prosser through jigsaw flash cut edits with zoom effects and numerous he-said-she-said voiceovers.

The politician is Carmine Polito, the mayor of Camden, New Jersey, who loves his city, its people and is willing to go over the edge to see his city flourish.

The spoke in Irving's life is his overtly anxious wife Rosalyn, who constantly sets fire in the kitchen and Richie DiMaso, the passionately enthusiastic FBI agent who corners him and Sydney into aiding him arraign a few cases of political corruption.

What starts off as a small sting operation to snitch, soon becomes an elaborate scheme. The plan blows out of proportion, as the targets become Congressmen and Mafioso, due to Richie's greed, impatience and weakness "to con the Mayor to build Atlantic City".

And soon, the scurry to outdo the other in order to survive forms the crux of the narration. But it is the constant niggling and doubting the intention of the characters that keep the audience hooked.

The performance from every cast member is outstanding. Christian Bale as the flabby Irving Rosenfeld leads the team. He dwells in that grey space of trust and uncertainty, with buoyant confidence that makes you believe in his honesty, as well as his ploys.

Bradley Cooper as the hot-headed Agent Richie, Jeremy Renner as Mayor Carmine and Amy Adams as Sydney Prosser, a lady from Albuquerque with "nothing to lose" along with her alter-ego Lady Edith - the well-connected socialite - are very impressive. So is Robert DeNiro as the bald Victor Tellegio in a cameo.

But it is Jennifer Lawrence as the disgruntled Rosalyn, loud and obviously intended as the comedic relief, who steals the show. She lights the screen as she executes the madness and unpredictability of her character with great ease.

The credit for the brilliant performance definitely goes to the well-crafted and occasionally funny script written by Russell and Eric Singer.

The over-the-top characters along with their spontaneous dialogues that are carefully layered with pop songs exude a subtle intelligent brilliance of the 1970s era.

After delivering excellent films like "The Fighter" and "Silver Linings PlayBook", Russell does not disappoint you with "American Hustle". Despite its flaws and lack in drive, it makes-up with style and excellence.

It is an ideal intriguing period crime film laced with comedy.

Actress Amy Adams has been announced as the recipient of this years American Cinematheque Award, which will be given to her on November 10.Read More