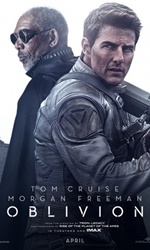 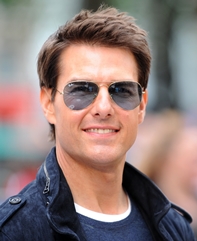 Are you an effective team? This oft repeated question in the film to Jack Harper (Tom Cruise) and his partner Victoria (Andrea Riseborough), in fact, raises a similar question in the minds of the viewer. Is the film effective?

A highly stylised sci-fi film, Oblivion is inspired by Moon, Wall-E, 2002: A Space Odyssey and many others.

Sixty years after an alien assault caused a nuclear war that destroyed the planet Earth, the human race takes refuge on Titan, the largest of Saturn`s moons.

With orders passed down from TET, the huge space station that orbits Earth and serves as their only contact with mankind, Commander Jack and his partner Victoria form an effective team that fends off rogue alien scavengers that are out to destroy the huge hydroelectric generators that convert Earth`s oceans into usable fuel on Titan.

While Jack is patrolling Earth and defending it from the scavengers, he is also battling his dreams, simply because his memory had been erased. During one of his routine patrolling trips on Earth, he rescues another human survivor, Julia (Olga Kurylenko), who jogs his memory and makes him realise that all is not as he has been told. There is something that the authorities are shielding from him. This, in a nutshell, forms the story`s crux.

With unfussy minimal performances and a strong visual style, the story focuses on the landscape and Jack`s inner conflict and curiosity.

Tom Cruise as Jack Harper is effective and adds zing to his otherwise comatose character. Andrea Riseborough as Victoria, is versatile as an actress - displaying warmth and compassion as a lover, and being ruthlessly rigid and frosty as a colleague, following rules laid down by the management. Olga matches up with Cruise and Andrea in histrionics. Unfortunately, Morgan Freeman, Nikolaj Coster-Waldau and Zoe Bell are wasted in the film.

The frames captured by cinematographer Claudio Miranda are worth a mention. The landscapes of Iceland never looked more beautiful. The terra firma in the film plays on the idea of desolation, but this barren scenery is also intricate and stunning. The computer graphic images inclusive of the afuturistic` tech shots fit seamlessly into the film.

The great production values as well as the background score by Anthony Gonzales and Joseph Trapanese, add to the film`s cinematic experience.

Though this two hour-five minutes long story seems simple, the film plied in a non-linear narrative, is confusing at times. The script is poorly written with few of its most integral explanations either dumped into expository speeches.

Writer-director Joseph Kosinski`s narrative resembles a montage of diverse perceptions ineffectually patched together from the various films he has been inspired from. But unlike the inspired films, the story of Oblivion is unsubstantiated and defies logic.