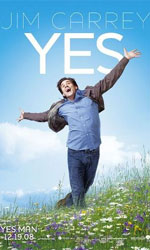 “Yes Man” stars Jim Carrey as Carl Allen, a guy whose life is going nowhere—the operative word being “no”—until he signs up for a self-help program based on one simple covenant: say “yes” to everything...and anything.  Unleashing the power of “YES” begins to transform Carl’s life in amazing and unexpected ways, getting him promoted at work and opening the door to a new romance. But his willingness to embrace every opportunity might just become too much of a good thing.

Peyton Reed (“The Break-Up,” “Bring It On”) directed “Yes Man” from a screenplay by Nicholas Stoller and Jarrad Paul & Andrew Mogel, based on the book by Danny Wallace. The film is produced by Oscar®-winning producer Richard D. Zanuck (“Driving Miss Daisy,” “Sweeney Todd: The Demon Barber of Fleet Street”) and David Heyman (the “Harry Potter” films, “I Am Legend”).  Marty Ewing, Dana Goldberg and Bruce Berman serve as executive producers.

“Yes Man” will be distributed worldwide by Warner Bros. Pictures, a Warner Bros. Entertainment Company, and in select territories by Village Roadshow Pictures.