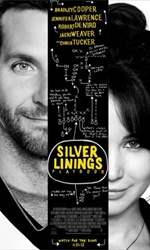 `Silver Linings Playbook` - cloudy yet shines
Rating: ***1/2
"Let`s be positive, let`s have a happy ending", "Let`s not take the negativity."

"Excelsior" (ever-upwards in Latin) is the mantra of `Silver Linings Playbook`. This is established in the very first scene of the film, at a mental hospital on the outskirts of Baltimore.

Adapted from the novel by Matthew Quick, the film is a love story of two indisputably damaged people on their way to rebound from all-time lows.

Patrizio Solitano (Bradley Cooper) is married; history teacher suffering from bipolar disorder. He has lost his house, his job and his wife. He is obsessively plotting how to win his wife, Nikki (Brea Bee) back, but has restricting orders from her and his colleagues.

So he lives with his parents Dolores (Jacki Weaver) and father Pat Senior (Robert De Niro) and is counselled by his court-restricted therapist Dr. Cliff Patel (Anupam Kher).

Tiffany (Jennifer Lawrence) is a troubled widow with a sexual, social disorder and problems of her own.

They meet at Tiffany`s sister Veronica`s place over dinner, where they bond over the medicines that they have been taking. But owing to mood-swings, things get complicated.

And what next - Tiffany offers to help Pat reconnect with his estranged wife, but only if he`ll do something for her in return. As their deal plays out, an unexpected bond begins to form between the two of them, and silver linings appear in both their lives.

There have been several movies about two damaged people who find each other, and quite a few that try to laugh off the painful struggle with mental illness. But it is wonderfully satisfying to see director David O. Russell`s "Silver Linings Playbook", a conservative or typical story structure handled with this level of craft and enthusiasm.

The film never feels like a movie you have seen before, even if Pat and Tiffany`s ultimate destination is clear the moment they meet. It seems clear to us, of course, but not to them; Tiffany assumes he`ll just be another entry on her long list of recent sexual partners, while Pat clings like a drowning man to the idea that his marriage to the invisible Nikki - which ended in an act of disturbing violence, as we eventually learn - can still be redeemed.

The first half of the film is intriguing and edgy, as the characters are established against the backdrop of demons and disasters of the family kind. About halfway through, the film shifts into a more conventional mode, taking on the usual trappings of the genre and making its way to a predictable resolution.

Nevertheless, the film unfolds in a very charming, evocative, comical yet engaging way.

Pat as the unrealistic truthful guy, with oodles of misplaced energy throughout, exhibits a fairly authentic portrayal of a sincere lovable guy. Lawrence as Tiffany is vibrant, rude, funny, foul-mouthed, sloppy, sexy, and vulnerable, sometimes all in the same scene, even in the same breath. The chemistry between the two of them, though subtle, is incredible.

Playing Pat`s parents, Robert De Niro and Jacki Weaver expertly convey why their son has turned out the way he has. It is a treat to watch them sink into the skin of the characters they play. Anupam Kher, on the other hand, had nothing much to offer.

With this film, the director has once again proved his mettle. He delivers a realistic picture of what manic behaviour in a family looks like. The script never lapses into mundane or uninteresting language. The scenes are well sculpted and amplified by the intimacy and focus of the director and his actors.

Tasanobu Takayanagi`s often jerky camerawork accentuates the mindset of the protagonists beautifully, enabling us to understand the liquid nature of their mindset.

Watching this film may not be a great cinematic experience but it definitely is one of the most enjoyable, gratifying and rewarding ones.