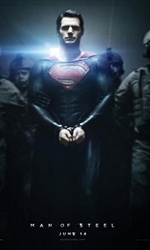 Catering to 21st century audiences, "Man of Steel" is the story that reveals the nativity and self-realisation of the Kryptonian caped-crusader, whom for the past 75 years, through comics, television shows and movies the world knows as Superman.

Though the story comes a little bit late in the day, it is refreshing to revisit the origination of this superhero.

So very similar to the stories of little Moses and Krishna from the Bible and Mahabharata, Kal-El is born during trying times on the planet Krypton. He is transported to Earth to "protect the survival" of its race.

Down here on Earth, rechristened as Clark, during his stay with his foster parents, farm folk Jonathan and Martha Kent in rural Kansas, he discovers that he has extraordinary powers and is not of this world. And so begins he journeys to learn what his purpose in life is.

Things finally snap into sharper focus when Clark follows news reports of a strange `anomalous object` unearthed somewhere in the Arctic. Here, he gets connected to his birth father Jor-El (Russell Crowe) who gives him a brief animated history of the rise and fall of Krypton and his purpose of existence.

It is nearly after about 40 minutes of the film time that Clark first exposes the embossed `S` shaped talisman, which in Kryptonian language means `embodiment of hope`.

Henry Cavill, 30, as Kal-El, makes a charming and enthralling `Man Of Steel`. He is convincing as the gloomy, conflicted Superman coming to terms with his unearthly status. Unfortunately, the script doesn`t give him much substance in terms of speech, but his action does all the talking.

Kevin Costner and Diane Lane as Cavill`s earthly parents deliver a touching performance. Russell Crowe as Jor-El walks through his role. Michael Shannon as Zod the antagonist is in comfortable zone and does not effectively provoke fear.

The narrow focus on Amy Adams as Cavill`s love interest, Lois Lane, the Pulitzer Prize-winning hard-news reporter who uses her journalistic acumen to quickly deduce his secret identity does not capture our hearts. That`s probably because the director did not give them much screen time.

The fight scenes, with its shock-and-awe barrage of sci-fi fire and brimstone, in the second half of the film gets weighed down by CGI overkill and thickets of exposition about the Kryptonian codex, making it boring after a while.

Nevertheless, the film is gripping even in its humourless tone and persistently noisy destructive aesthetics. It connects with its audience on the emotional front.

"Man Of Steel" is definitely a recommended watch.

Actress Amy Adams has been announced as the recipient of this years American Cinematheque Award, which will be given to her on November 10.Read More