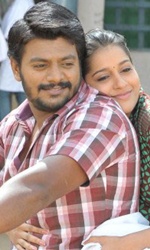 `Guru` doesn`t live up to expectations
Rating: **
Actor Jaggesh, who has worked in over 130 Kannada films, has turned director with "Guru". Both his sons - Gururaj and Yathiraj - have prominent roles in it. Jaggesh is one of the most popular hero-comedian of the Kannada film industry, with more than two decades of experience.

His first directoral venture was eagerly awaited, as his son Gururaj was not able to prove anything in two of his earlier films. However, Jaggesh, who spoke a lot about his first directorial venture being inspired by a Korean film, falls flat in his direction. And even his assertion that the film is a take off from a Korean film may be untrue because the entire film looks like a remake of Tamil film "Mouna Guru", released in 2011.

The movie`s story goes on like this - Guru is a young boy who comes to join a college in a city where his elder brother works. Guru is placed in a hostel where he is ragged by a few students. But one solace for Guru is his friendship with Ankitha, who is the younger sister of his sister-in-law. Meanwhile, in an unrelated development, four police officers follow a speeding car, which meets with an accident. They find that the driver is unconscious and search the vehicle, where they find crores of rupees placed inside the boot space.

The driver wakes up, but he is killed by the ACP. He advises the other policemen that they can share the booty if they follow his instructions. Later, the ACP himself is trapped by his girlfriend, who secretly films his conversation with another police officer. Unfortunately, Guru will be made to get involved in this confusion. Another woman police officer tracing the case sets out to find out the real culprits. How Guru comes out of the web and confusion created by the four policeman forms the rest of the story.

The film falls flat on the narrative, which may confuse the audience. Despite a well-oiled script, Jaggesh has thoroughly failed to give a new image to his son, who was in a desperate need of a hit. Frankly, Jaggesh`s second son Yathiraj, who plays the villain`s role in the film, has performed better than his brother Gururaj.

However, one must mention that Gururaj has improved on his dialogue delivery in this film, and his action sequences are well shot. Yathiraj is impressive.

The selection of costumes for Gururaj is awful and his looks in the film do not reflect the innocence required for the role. However, one thing that goes for the film is the racy script. Events happen at the drop of a hat. Also, the camera work stands out in the film.

The performance of veteran artists like Sreenivasa Murthy, Shobharaj, Sudha Rani, Shylashree and Abhijith fit the bill. Ramesh Babu comes off good through his cinemetographic work with apt lighting, while music by Vinay Chandra is okay.

The editing could have been sharper.

"Guru" is watchable once, but Jaggesh and Gururaj have failed to meet the expectations of fans.