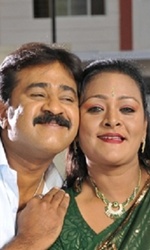 `Golmaal` drags, lacks fun element
Rating: *
This "Golmaal" is different - it`s neither a patch on Hrishikesh Mukherjee`s classic comedy of the same name in which Amol Palekar and Utpal Dutt had outwitted movie buffs, nor does it have any similarity with Bollywood filmmaker Rohit Shetty`s recent "Golmaal" series that were high on commercial elements.

The Kannada film is a patience test for viewers.

Before the release, the producer and the director had claimed it to be a full-length comedy, but hardly anybody was heard laughing in the theatre.

If you are seeking fun and entertainment through the movie, you will be disappointed.

Actor-turned-director Pramod Chakravarthy has tried to narrate the story in a reverse screenplay manner, but it ends up on a dreary note. The film`s comedy does not make any impact.

The continuity factor is also missing in the narrative. In short, the whole film looks like a nonsensical `tamasha`.

The only watchable part is climax, which has well-written dialogues.

In terms of performances, the cast has been allowed to carry on their irritating, monotonous acting. Even the music is dreary, but cinematographer Giri has done his job with precision.

So, the redeeming features are the camera work and the climax.

In the film, post graduate Chakravarthy needs signature of a minister for a certificate, but the greedy minister asks for a bribe of Rs.50,000 to do it.

On the other hand Preeti, who wants to achieve something in life, initially misunderstands Chakravarthy and even criticises him for trying to hook her.

But one day when she is confronted by some rowdy elements, she hits one of them with an iron rod. The guy starts bleeding profusely and falls on the ground. Preeti assumes him to be dead and tries to escape from the scene with Chakravarthy. They hide in a jungle. Later, it is revealed that Preeti is the niece of the corrupt minister.

Shubha Poonja`s performance needs to be toned up. Rangayana Raghu, Petrol Prasanna have over acted, while Tabala Naani and Sankesh Kashi were apt choices for their roles.

"Golmaal" is disappointing to the core.