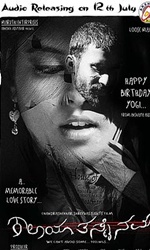 `Kaalaaya Thasmai Namaha` a lengthy, tedious film
Ratings: **
"Kaalaaya Thasmai Namaha" has a misleading title. It does not relate to the ups and downs of life. The film`s story is based on a contract killer, who is constantly on the run fearing onslaught of the police on a hunt for him. The film, which adds to the list of underworld-based films where the protogonist falls for an innocent young girl, has nothing new to offer.

The major attraction of the film in the form of a song rendered by the film`s hero Yogi, is a take over from the "Kolaveri di" song of Dhanush-Shruthi Haasan Tamil film "3". However, viewers would need loads of patience to watch this tedious film besides possessing the capacity to endure long periods of boredom.

The movie starts with a criminal Tukaram, popularly known as Ten, working for a underworld don, who takes contract killing assignments.

Ten is also being chased by the police and another Bengaluru-based don. Meanwhile a young girl Madhu falls for him and even leaves her house to be with Ten. But later she realises that she has made a mistake in her life by falling for a dreaded criminal. Ten is also advised by his mentor that a criminal like him should not fall in love to create problems for himself and the lover. Meanwhile, the girl`s father gives a contract to the don to kill Ten.

Ten wants to protect Madhu at any cost. He finds it little difficult and decides to take Madhu to her father`s place. The police, who is on the chase to kill Ten and his three accomplices, a disappointed Madhu walks to her father`s house.

Yogish has once again tried hard to underplay his role. He is good as usual. But the film`s new heroine Madhu is a revelation. She looks beautiful on screen and has been able to emote with perfect expressions. All the veteran artists have put in neat performances. Cine Tech Suri gets ample scope in his work and he uses his talent perfectly. This film has the best work of music direcor A.M. Neel.

Chandrashekhar Shrivastav had earlier directed a film like "Patre Loves Padma", which was also unforgivably slow in narration. Rather than making some amends in writing an interesting screenplay, the director flounders again. Watching a film like "Kalaaya Thasmai Namaha" does not bring credit either to the award-wining actor Yogish or to the other artists and technicians who have worked hard for the film.

On the technical side, the film scores because of the superb camera work of Cine Tech Suri and good music compositions by A.M. Neel. However, the editor should have used his discretion in chopping off a minimum of 45 minutes of this lengthy 165 minute-long film.

"Kaalaaya Thasmai Namaha" is a lengthy film, with some good performances and camera work. Watch it if you have patience to watch tedious films.