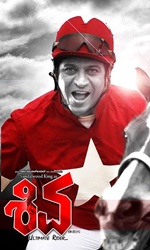 Director Om Prakash Nair`s "Shiva" is a typical masala potboiler with all the ingredients of entertainment. It is rich in production values but fails to impress due to weak script, though it is a treat for Shivarajkumar`s fans.

The actor shows tremendous energy in the way he executes the fight sequences and dance movements. The dialogues may look odd to the film`s content, but completely suit the actor`s image.

The film tells the tale of Shiva and Julie, who meet each other often and eventually fall in love. Both of them are on a mission to seek revenge from villains Aadi and Panduranga Shetty. Julie has already killed the brother of Aadi, and pretends to be innocent.

In the meantime, Julie plans to confess her love to Shiva and calls him to a graveyard. Shiva comes to meet Julie, but he is attacked by a gang of goons.

Surprisingly, Julie also stabs Shiva, as she thought that he was the son Panduranga Shetty. However, Shiva survives after he is admitted to the hospital. Realising that she was wrong, Julie joins hands with Shiva to declare war against the villains.

Nair is an honest director and happily agrees to borrowing concepts, ideas and sequences from other non-Kannada films, "Shiva" is no exception. But the second half of the film turns out to be a tedious watch.

The interval scene of the film reminds you of Shivaraj`s earlier blockbuster "OM" directed by Upendra, while some sequences are similar to the actor`s hit film "Simhada Mari" that was directed by Om Prakash himself.

The film ends up to be an average fare despite Shivaraj`s charisma. The actor displays lots of energy even at his fifty plus age. His style quotient and dialogues are the real strength of the film.

Ragini also proves that she can effectively carry off any role after giving a neat performance in "Shiva".

Ravishankar scores well in villainous role, while Rangayana Raghu and Guru Datt are lively in their performances. Shobharaj and Bullet Prakash bring in a few laughs.

"Shiva" is a treat for ardent Shivaraj`s fans, but for other cinema buffs it is just an ordinary venture.