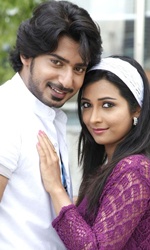 `Sagar` - a good timepass! (Kannada Movie Review)
Rating: **1/2
When a big production banner like Ramu Enterprises makes a film, one has great expectations. "Sagar", the latest film from this production house, is directed by M.D.Sridhar, and stars Prajwal Devaraj and current sensation Radhika Pandit in the lead roles.

It is a well-made commercial entertainer, but does it match the hype built around it before the release? Well, the answer is partially yes.

The rich production values and package of good commercial elements will engage the film audience, but the inconsistency in the narration is a real dampener. "Sagar" could have been a very good commercial entertainer, but ends up as a timepass film mainly because of the pace of the narration, which is lively only in the first half.

The story starts with Australia-returned Sagar being pressurised by his family members to marry his relative Priyanka. Sagar`s father Rajashekhar is a big industrialist who is being targeted by his own cruel brother. Sagar and Priyanka do not feel that they should get married as they are just like good friends. The story takes a turn when Sagar tells his parents that he is in love with a girl called Kajol, who is in Australia.

His Australian friend Sanjana sends a photo of Kajol to help out Sagar to weave a fictional story. But in a twist to the story, Kajol arrives in India and joins the family of Sagar. She is extremely liked by the family members of Sagar, and they want her to be part of the household. Finally, it is revaled that an international don Dev had an eye on Kajol and he even kills her parents when they do not give in to his demand.

A frightened Kajol comes to India on the advise of her father, who asks her to leave Australia while he is breathing his last. Meanwhile, the don also comes to India to search for Kajol. What happens later with Sagar deciding to protect Kajol and Dev trying his level best to kidnap Kajol, forms the rest of the story line.

The last 20 minutes of the film are quite engaging. While the fights and three songs are good, the inclusion of some unnecessary sequences in the second half drags the film. Even the story does not offer any freshness, but the production values makes the film much attractive.

The comedy portions in the film are weak, but the song picturisations are a strong attraction of the film.

Prajwal Devaraj once again shows his penchant for action and dance sequences in the film, but he could do better in emotional scenes. Performances of Dev Gill, Radhika Pandit, Hari Priya are favourable for the film.

Aadi Lokesh, Avinash and Sharat Lohithashwa are perfect choices for their roles. Kaddipudi Chandru fails as a comedian, while all the veteran artists have performed well.

K.Krishna Kumar`s camera work is top class, but Guru Kiran who has done a good background score, does not show consistency in song composition. The picturisation of songs is good. The editing work is also good, as are the technical values of the film.

"Sagar" is a decent watch for fans who are satisfied with timepass products.