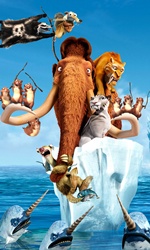 `Ice Age: Continental Drift` - drifting into mediocrity (IANS Movie Review)
Rating: **
What do you do when a film franchise has run its course to such an extent that there`s no way forward? Simple. You take elements from popular films, try to make the story about something `familial` and make one more film trying to inject life into the dead franchise even at the risk of drifting all the way into mediocrity and cliches.

This exactly seems to be the formula for the Ice Age franchise with the latest part generously taking elements from other popular films even as it seems to forget the fun, emotionality or even the ingenuity of the original.

In the end of the Paleozoic era, the supercontinent Pangaea had begun breaking apart due to the acorn hunting habit of Scrat. Caught in the middle is the `herd` of Manny and his family, Diego and Sid. As Sid is united with his crotchety grandmother, Manny separates from his wife and daughter.

Drifting on an iceberg, the trio and the grandmother are captured by a pirate captain. As they escape, a crazy and funny chase ensues.

Ice Age 4 suffers from ambition - the ambition to exist. After two previous forgettable installations, the franchise should have come to an end. Sadly, the studio decided to give it one more run. Though they try their best, it isn`t enough and the film drifts towards mediocrity and cliche ending on a whimper one was expecting all along.

The film puts together the usual theme of catastrophic global events and weaves together a lot of nice gags with the best and funniest being reserved for the exploits of our beloved Scrat. Though on their own the gags are funny, the problem is in the attempt to weave them into one coherent whole. In the absence of any real story, the film falls flat on its face.

The film tries to redeem itself with the introduction of a goofy bunch of characters, led by a pirate chimp. But this `hairy` spoof from The Pirates of The Caribbean series isn`t enough to raise it high enough, despite introducing a love interest for Diego.

All in all, lot of precious funds were wasted in a film that need not have been made in the first place. Diehard fans, however, will love reliving the antics of their favourite characters.