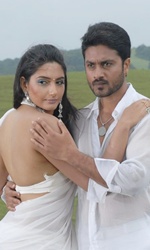 M.S. Ramesh`s "Villain" was expected to act as a catalyst for actor Audithya`s movie career as this was an opportunity for him to portray different shades in his role, but a weak script and dragging narration have failed to create an impression.

The film, which was released with low key publicity, does not have any elements of novelty and even the item song picturised on Raagini, which was expected to up the glamour quotient of the film, looks very plain on-screen.

Audithya plays the role of Tippu, an orphan, brought up by a local MLA Rajendra and his henchman Ali. He is used as a hitman to threaten the opponents of Rajendra, who have become the victims of his oppression and atrocities. Tippu has acquired a certain degree of notoriety for his actions aimed at protecting his master.

Meanwhile, Anu, a radio jockey, is quite impressed with Tippu`s helping nature and falls for him. Tippu is torn between his love and loyalty to his masters. Rajendra and his gang tries every trick in the trade to create a rift between the lovers.

Meanwhile, Anu`s younger brother, an investigative reporter from a news channel, possesses a video containing some incriminating evidence against Rajendra`s gang. He gets killed by Rajendra and Ali, in front of Tippu, who is sent by Anu to save her brother.

After that, Anu tries to stay away from Tippu, which hurts him. In the end, an honest police officer advises Tippu to help him out in giving evidence against Rajendra`s atrocities. Finally, Tippu wins over Anu.

Not only the situations, but even the dialogues are easily predictable.

The film fails to maintain the attention span because of its boring narration and very poor production values.

Though Audithya has done his job perfectly, it is pitiable that an actor like him, whose intense performances in films like "Deadly Soma" were critically acclaimed, is still acting in a nondescript film like "Villain".

Other artists do not have enough scope to showcase their talents.

Dasari Seenu`s cinematography is below average, while Guru Kiran`s music also lacks weight. It seems that writer-director M.S. Ramesh is unaware of the stylish presentation in song picturisations these days. "Garam masaale" song may please the front benchers.

Nothing could be positively said about the work of other technical departments.

"Villain" is a poorly made film with a dragging narration. So better look for an alternative.