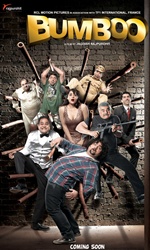 Bumboo, a self-proclaimed action-black comedy is one of the smallest of summer films of 2012. It is a summery light-hearted, frothy entertainer, so they say, but it is far from that. Better uncategorised perhaps.

Directed by Jagdish Rajpurohit, Bumboo has the gloss and wit of a loosely inspired French Film L`Emmerdeur, whose story has been written by Francis Veber. Unfortunately the journey from the French to its Hindi version seems to be a joke.

But if `Bumboo` is a joke, who is at the receiving end of the joke?

The picture moves on a notorious scamster, Manu Gupta (Sudhir pandey), who is caught by the Mumbai Police and is supposed to be presented at court in Goa. Since many influential people are involved in the scam, ace hitman Mangal Singh (Sharat Saxena) is roped in to eliminate Manu.

Getting a whiff of the elimination plan, the editor of a well-known paper decides to send his lovelorn depressive photographer Suresh Sudhakar, also known as Su Su (Kavin Dave) to capture the exciting moment.

The hitman and the photographer land up in the same hotel as neighbours. What follows is a series of loud ludicrous moments, which are neither rib-tricking nor visually appealing.

But the film has some good comic moments too. The hotel room sequences among Kavin, Sanjay and Sharat generate laughter. An emotional scene between Pinky (Mandy Takhar) and Kavin is also worth a mention, but such moments are few and far between.

With two sub-plots that run parallel, the movie ends abruptly, leaving the viewer wondering what is happening. Bumboo is intended as a light-weight comedy, but if you think about it too much, it`s not so funny.

The dialogues and screenplay written by Kavin are nothing but loud and distasteful. Inclusions like sounds of wind and the insinuation of sexuality with incessant PJs, get to you after a while.

And the last line in the film, well… is too cheeky.

Imagine asking the viewer to recommend the film to others, regardless of your opinion about it.

With over-the-top acting, there is nothing extraordinary in the performances.

Presenting the beefed-up Sharat Saxena as a soft hearted killer was a good idea, but in totality he is lacklustre. Sumit Kaul`s characterisation is very confused. He is neither funny nor vicious. Mandy as Su Su`s sultry wife is only noticeable in the item number.

What further highlights the flaws of the film are the glaring poor edits. The jump cuts in the hotel room scene and in many others, makes the film look very amateurish.

Considering that the film is shot in a scenic place like Goa, the cinematography too is nothing worth mentioning about.

Bumboo is not about great ideas. Everything is hackneyed and trite!

BUMBOO is a story based on the idea that in this life we all meet someone who comes and screws it all up ( ya phir jisko bambiyaa bhashaa mai humVaat lagna kehte hai). Each character in the film screws someones happiness which create extremely humourous situations and rib tickling comedy.

BUMBOO is based on a original story L’Emmerduer written by Francis Veber ( French writer & director with brilliant films like ADINNER GAME ( Indian version : Bheja Fry ) , VALET etc. The film when launched in France first time created a history of sorts with its box office success and is considered a comedy classic in France even today.

Professional hitman Mangal Singh takes a contract to kill stock market scamster Manu Gupta in front of the Goa High Court where he is to undergo a trial. Mangal Singh plans to do the job from a hotel room which is opposite to the court.

Suresh Sudhakar , a press photographer is sent to Goa to coverManu Gupta’s trial and checks-in the same hotel next to Mangal Singhs room .

Sudhakar tries to meet his ex-wife Pinky who is living in Goa . Pinky refuses to meetup or even talk and confers with her new boyfriendDr D’Souza. Sudhakar threatens pinky that he would commit suicide , but she does not belive him. A depressed Sudhakar tries to commit suicide by hanging from the bathroom shower but fails. Bell Boy Vincent ( who is in Mangal Singhs room at that moment ) hears the ruckus and opens the centre door between Mangal Singh & Sudhakars room due to which all characters get to interact with each other.

Mangal Singh scared that cops might come to the room , assures Vincent that he would take care of Sudhakar and there is no need to call the cops. Assured by this promise Vincent leaves Sudhakar in the care of Mangal . Sudhakar in the meanwhile assumes that Mangal is a truly good samaritain and taking fancy for his friendship does not let Mangal go anywhere or let him do his job .

Pinky’s boyfriend Dr D’Souza ( a pyschiatrist ) comes to the hotel to consel Sudhakar not to commit suicide, but ends up meeting Mangal & mistakes him to be Sudhakar and gives a sedative to Mangal due to which he is not able to do any work . Completely baffled by these turn of events, Mangal forces Sudhakar to call the Dr back who now comes with Pinky and cures Mangal of his condition but not before Pinky and Sudhakar have a chat which causes more distress to the Dr. Pinky has a major showdown with both Dr D’Souza and Sudhakar and leaves in a huff only to return and speak again to Sudhakar and convince him to go away .

During the course of the story we also visit Manu Gupta’s entourage which is travelling from Bombay to Goa in a police van disguised as a Milk Van with a group of commandos in it. At each visit, we see how manu Gupta is making thier lives miserable with his silly antics.

All this while Mangal Singh who has come to Goa for the special operation is unable to do anything and undergoes several shocks of being treated multiple times by the Dr and reacting adversely to each dose of medicine while Sudhakar keeps pestering him to reach out to Pinky and help him get her back.

Manu Gupta the scamster finally reaches Goa but before he can be shot by Mangal , tremendos ruckus follows in the room where Mangal , Sudhakar, a Cop and others fight it out and literally end up dangling from the hotel while a shot is accidently fired from Mangals gun which hits Manu Gupta’s ass . ! Despite this hit , Manu Gupta reaches the court and gives his witness against all scamsters. Mangal Singh retires in a Ashram due to the shock of forced freindship thrust upon him. Sudhakar gets back Pinky and lives in acrimony with their child and Pinky.