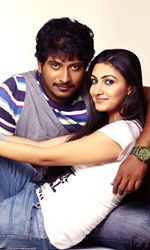 S.V. Ranga Rao makes an unimpressive debut with `Mr. 7` (Telugu Movie Review)
Rating: *
Late S.V. Ranga Rao was a legend and worked in memorable Telugu films like "Mayaa Bazaar", "Krishnarjuna Yudhdham", "Pandanti Kapuram" in and Tamil movie "Annai". He had worked with many top legendary artists like MGR, Sivaji Ganeshan, NTR, A. Nageshwara Rao and many others. He was knonw for his versatality.

His grandson, who is also called S.V. Ranga Rao, made his debut with "Mr. 7" and and is not even a patch on his late grandfather.

The whole product looks immature and illogical and would disappoint the legendary actor`s genuine fans.

Director Charan Reddy does not show any promise. With the weak script and age old story, he has little to do in the film and he also failed in extracting some decent work from his artists.

There is no space for emotions in the film and very few comedy sequences are tolerable.

Producers used veteran actor`s name in the publicity materials of the film, but the weak screenplay would make audience wonder whether it is a tribute to the late actor or an insult to him?

Production values are mediocre with the camera work coming cropper. Only two songs are passable.

In the film Lakshman, an orphan, and Anji are partner in crime - the duo carry small robberies like bike stealing and burgling together.

Lakshman is in love with Nakshatra who does not know his background. Lakshman decides to put an end to his criminal activities after stealing an expensive car.

On the other hand, professional thief Naik plans to rob a bank and he makes a team of experts to carry off the heist.

Naik and his team complete the job and carry the money a Mercedez Benz, which is stolen by Lakshman.

The police gets a tip about the robbery and starts chasing Naik and his gang members. Now, Lakshman lands in a serious problem as he is actually chased by the police.

How Lakshman comes out of the mess and marries his lady love forms the rest of the story.

Ranga is an ordinary actor, while Neelam Upadhyaya is a misfit and spoils the show. Her expressions are quite horrible.

Comedy artists AVS, M.S.Narayana, Sreenivasa Reddy are capable of carrying even the weakest roles with elan and they have done the same in the movie.

Rachana Mourya`s item song could have been redeeming feature but it is picturised badly.