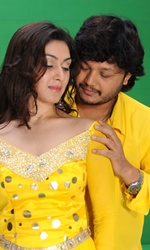 It seems that S. Narayan enjoys burdening himself by stepping into various departments of filmmaking at a time. But it doesn`t work.

Despite an average response to his musical talents in his previous attempts, Narayan continues to dabble in music composing and also takes up the job of writing and directing films. The result is "Munjaane" - a musical hotch-potch.

With multiple responsibilities on one`s shoulder, it`s hard to put together a creatively sound, dependable script. Therefore, Narayan happens to have written his script with a lot of `inspiration` from many past films.

Some sequences seem to be straight out of Tamil films like Bharathi Raja`s "Kizhakke Pogum Rail" and Agathian`s "Kadhal Kottai". The bus in "Munjaane" replaces a train featured in the other films.

The story revolves around Manu Murthy, who helps his father in his Mysore-based business. Once he reads a small poem written on a bus and instantly likes it. He responds by writing his appreciation just below the poem. The poem is written by Pavithra, a girl from middle-class environs in Davanagere.

The bus becomes a medium for Manu and Pavithra to record their emotions. Gradually love blossoms through this exchange of romantic notes written on a bus. But Manu and Pavithra don`t come face to face until they decide to reveal their identities and contact numbers when the rain washes the written messages. They exhaust all the options to find each other.

By sheer coincidence, both Manu and Pavithra marry each other because of compulsions in their family. But the lovers who are married now, prefer to stay apart and maintain distance because they can`t get over their feelings for their mystery lovers. How this knot of suspense in the two protagonists gets cleared, forms the climax.

Narayan has tried to include some double-meaning dialogues in the film which may look a little offensive to sensible family audience, but they might also appeal to front-benchers. The comedy sequences in the film are of utter bad taste.

Coming to the positives -- it is the quality of some dialogues which may appeal largely to film fans. There are a lot of emotional sequences in the film. Though they are predictable, some dialogues are genuinely heartwarming. However, some illogical and worthless sequences follow immediately after, and turn them into dampeners.

The biggest flaw in the film is the climax. It looks as if the director who is also the story writer, does not know anything about networking sites like Facebook. So the way the climax unfolds is utterly laughable.

The director has made a wrong choice for the heroine too. Manjari Phadnis does no good to the movie.

However, Ganesh saves the entire film by his brilliant performance. He has certainly excelled as an actor, but there`s little he can do with such a senseless story.

Malavika Avinash overacts, and Narayan, who is also in the film, has just done an encore with his usual double-meaning dialogues and bad facial expressions.

The songs are badly picturised with too much of graphic work spoiling the effects of good visuals. Jagadish Waali, who had done wonderful camera work in "Shyloo", does average work in this film, and the editing is ordinary too.

On the whole, it looks like Ganesh`s performance is the only saving grace of "Munjaane". Otherwise it is another average fare.