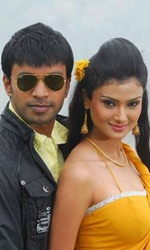 The year just ending seems to have been good for the Kannada film industry as far as success rate is concerned. But at the same time, a large number of films with poor quality and worthless scripts had to bite the dust. `Bete` joins the list of extremely bad films that have hit the screen this year.

Sreenivasa Kaushik had showed some promise in his first film, `Yaaradhu`. But in `Bete`, it has been an overall failure for this youngster who exhibits his lack of knowledge in narrating a story that revolves around cyber crime.

It becomes clear within minutes of the film`s beginning that Kaushik has not worked properly in collecting the necessary data for a serious subject. There are a lot of loopholes in the way he narrates the story on screen. The best example is the way the heroine is projected on screen, holding the job of a print media journalist. Besdies these two unrealistic elements in the film, Kaushik`s direction clearly proves that he has no control over the media.

Added to these aberrations in naration, the characterisation also suffers. The way talented artists like Anant Nag and Pavithra Lokiesh have been used in the film is utterly laughable. There is not even one sequence in the film which is worth mentioning as a good piece of creative work.

The film`s heroine, Ayesha, plays the role of journalist Ashwini Chengappa, who has the uncanny ability to expose many scams.

Ashwini`s investigations have been successful in getting many criminals inside prison. While her father appreciates her daring acts, her own sister is not proud of her achievements.

One day, her sister comitts suicide, causing agony to the whole family. Ashwini suspects the suicide theory and wants to take the case to a logical conclusion. She starts searching for the people who are responsible for her sister`s death. In the process, many secrets surface including illegal transporation of girls to Dubai, and then using them as sex workers.

Ayesha shows her prowess in fights, but falters in her performance. Ishitha Vyas is used for adding a little bit of sex appeal to the film. Anant Nag and Pavithra Lokesh are wasted. Akshay, who had made a debut in `Ganga Cauvery` has been given a different type of role in the film. Harish Rai, Aadi Lokesh, Killer Venkatesh and other villains are not scene-stealers in the roles they perform.

The film is very poor in technical quality with music composition and background music hitting the doldrums. Camera work is also of poor standards.