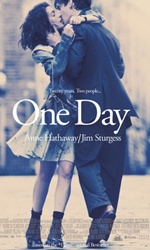 What is one day amidst the march of hundreds of thousands of days in a person`s life? But a day can indeed become a metaphor for the life of a person, a representative of all their years. And when you capture one particular day of a year in the lives of two people, patterns emerge and so does the element that make life the beauty it is - love, separation, humour, loss, pain and reunion.

`One Day` opens on the day when Emma and Dexter meet officially. Opposites in every way, they almost sleep with each other on that day, but realize they are better off as friends. Over the next two decades, they remain friends and despite their differences, realize they are perhaps made for each other. Question is: would the realization be too late?

There are many films made where two good friends take years to realize they are meant for each other, the most popular being `When Harry Met Sally`. `One Day` is in that mould. Where it scores over most others is in its wit and ability to make you believe in the characters despite showing just a few days from two decades in their lives.

It thus becomes a streaming together of many `what if` moments from the lives of two people who almost get together, bump through each other`s lives, being there for one another yet never noticing, always arriving but never really reaching their destination - love.

It is a journey through nostalgia and most of us would relate to it: either partially, in a few moments and few of us perhaps entirely. Because the truth is, in each one of our lives, we have friends of the opposite sex like these two people, who we gel greatly with, but somehow never consider as life partners.

The chemistry between the lead of Hathaway and Sturgess is believable and though the transition through the years, and the changes in them may not be so well handled by the actors, especially Sturgess, it does get the film off the ground for most viewers.

The film does try to break cliche, especially by underplaying key moments, like the time when they first slept together. You`ll perhaps not realize when they did. The idea is that life is about much stronger and deeper feelings than lust.

Adapted from a book by David Nicholls, the film is like our protagonists, almost arriving at the precipice, but never really taking a leap of faith from the known into the unknown. It is still a much better watch than the scores of rom-coms Hollywood makes. And much wittier and funnier.