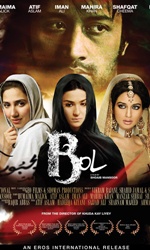 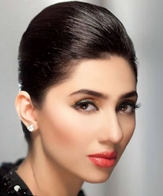 `Bol` - speak up for this little (IANS Movie Review)

Pakistan, in contrast to India, which is one the largest film producing nation in the world, barely makes a handful of films every year. To see a Pakistani film that is better than most commercial Indian films, is embarrassing. Bol, despite its few flaws, becomes that minor masterpiece that eclipses Bollywood.

A woman sentenced to death recounts her story of growing up in the shadow of an oppressive father, who denies his girls their fundamental rights.

At the face of it, the film seems apolitical. However, one of the feminist movement`s clarion reasoning for action against oppression has been that the personal story is political. And it is this politics in the personal story of this family that writer-director Shoaib Mansoor of Khuda Ke Liye fame handles with elan.

Mansoor manages a very difficult task of taking up many issues without losing focus on any. You, thus, have issues of women`s emancipation, trans-sexualism, right to education and religiosity handled with care enough for the audience to feel for each. The layers in the script itself make it a worthwhile watch. And that the film opens up gradually like an engaging mystery, keeps the viewers engrossed.

To carry so much load on its shoulders, the film needed some superlative performances. It has this in Humaima Malick who portrays the angst of a girl who itches to do the right thing and Manzar Sehbai who is stellar in his performance as a hypocritical man.

The songs are catchy, especially `Kaho` - the least one can expect from a Pakistani film, considering their strong musical scene. The only problem, however, is its melodrama that sometimes does get overbearing. But it is a small flaw amidst its many skills.

At first look, it is easy to denounce it as a statement against the oppression of women under Islam. That is indeed true, considering that women`s emancipation has yet failed to touch Muslims to a significant extent.

Yet, to call the film just that would be an insult to its intelligence. For what it does in the chauvinist, hypocritical and obnoxiously religious character of the father, is to create a template for closed-minded men everywhere.

His stubbornness and manhood are a metaphor for `the` manhood that causes war and destruction everywhere.

Replace the Muslim Hakim, with a staunch Hindu man, and set the film in India, and it would be true frame by frame. If you look at the treatment of women in India, it is often worse with literally hundreds of thousands of women being killed before birth or during it annually in India.

Female infanticide is one of the most obscene elements of Indian society. Also, almost in every village, small town and city in India, you`ll find scores of such cases of chauvinist men doing worse to their wives and daughters.

Asia`s most revolutionary poet, Faiz Ahmed Faiz, in one of his most rousing poems, had written, `Bol ke lab azad hai tere..` (Speak that thy lips are free). In this, and in the film Bol, lies a message for us all, to speak out against oppression, be it in the political sphere or the personal.

Bol is Shoaib Mansoor`s second dramatic breakthrough of revealing life with its complexities. After Khuda Kay Liye, that went on to win several international awards, Bol is another gripping story authored by him. A story that shows the realities of life very closely. The web of relationships within a family that barely makes ends meet. On top of the poverty the father subscribes to a set of values many would relate to…Values that we inherit and tightly hold on to, values that embody contradictions, values that have not been questioned.

Bol is a roller coaster of emotions, yet carries subtleties that make your heartbeat stop. Based in the heart of Lahore, the story takes place in a house full of daughters, with vibrancy of life, yet restrictions on blooming. It questions the worth of a human being, may it be a woman or a person born with defect. It questions the authority of reproducing human beings into this world without taking responsibility of acknowledging their worth.

Bol takes you through a journey into the life of this family experiencing their troubles, sufferings, resolves and high points. As family members take decisions to solve their problems they steep into deeper troubles. The complexity of their circumstances becomes a struggle of life and death.

Humaina Malick, after gaining popularity on the small screen in the recent years has been picked for the big screen for the first time. She plays a daughter who gets affected the most by the family tensions. She respects the norms she has been given by her parents yet is compelled by her intuitive logic and sense for justice to rebel.

Atif Aslam plays an enlightened neighbor, and with his two loves, one for music and the other for the next door beauty, Mahira Khan, adds romance and melody to the film.

Iman Ali will be seen in a very different role than her usual appearances. Courtesan who is ambivalent between the standards of success her family considers so important and the desires of her own heart.

`Bol` is Bold. ...so bold that some will find it hard to confess that they have seen it!