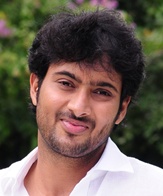 A petite female raising the hackles of a possessive lover by naming a different suitor is almost as old as time.

That, in a nutshell is the plot of "Gunde Jhallumandi" set against a college backdrop featuring Uday Kiran and Aditi.

A rustic political aspirant Balaraju moves to a city to obtain a graduate`s degree. He falls for a femme fatale collegian Neelima.

After bluffing that she has a different lover for a while, the heroine accepts her bumpkin suitor. And a surprise bad man suddenly turns up to stake a claim to the girl.

How the lovers best the impostor forms the rest of the tale.

In the sixties and seventies, hackneyed plots used to be written to weave 6 catchy songs into a movie.

If the numbers were hits, the movie would fare well, or so the formula went then.

It is a mystery as to why Keeravani, who contributed considerably to the success of "Pandurangadu" earlier this year, had to come up with this below-par effort.

Director Madan seems to have worked in bursts of inspiration and lows of insipidity. As a result, the move is a series of staccato bursts of spirited scenes and silly soliloquies.

Uday and Aditi look like winsome college kids Balaraju and Neelima, respectively, and attempt to resuscitate the inane proceedings in patches.

Prabhakar Reddy has provided some interesting frames. But, they are too sparse to leave a lasting impact.

In short, this one is a sheer wastage of resources.