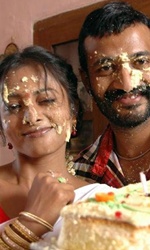 NRI director Ashok Patil makes films only when he is holidaying in India and so far he has tried to do good films. Though his debut film Shaapa failed to entice the audiences, the experiments he tried in that have been noticed. After that he made Joke Falls, a remake of a Hrishikesh Mukherjee directed Hindi film, and it did reasonably well.

Now he has returned with a decent edge-of-the-seat thriller called 9 to 12.

Unfortunately, the film has been released with no publicity as a result it has not been able to create a buzz, which is necessary because nowadays audiences focus on hyped movies. But Ashok Patil has done a fairly good job by weaving a story which is able to create curiosity among the audiences.

Not that 9 to 12 is flawless. The film about incidents that happen between 9 to 12 at night makes a disastrous beginning with a boring narrative. But it gathers momentum, thanks to interesting incidents.

Patil could have done a better while selecting artists for pivotal roles. The film also suffers from poor production values. The music could have been a little better and the songs` placement may irritate you. Many sequences in the first half drag, particularly when a bunch of eunuchs get into the hero`s taxi.

Despite the flaws, the film keeps the audience engaged in the second half. Coming to the plus points of the film, Patil has been able to mix sentimental elements into a thriller. The mother-son and father-daughter sentiments gel well.

The story goes like this - Munna is a hot tempered driver who is attached to his mother and daughter. His neighbour Durgi loves him despite knowing that he is a widower.

Munna takes a loan to buy a car after he is sacked by his employer. At the same time his mother is admitted to a hospital and she needs to be operated upon and it will cost Rs.300,000. Munna is devastated, but help comes in the form of an underworld chap who is ready give him money if he transports a bag to a nearby railway station.

As the film moves towards the climax, Munna is able to bust human trafficking attempts of underworld. Meanwhile, he also rescues his own daughter who has been kidnapped by the underworld.

Kishore Kumar has delivered a good performance. Actress Smitha, who has changed her name to Nivedita, doesn`t suit the role. Her limited presence in the film doesn`t make any impact.

9 to 12 is a good watch for people who love suspense thrillers.