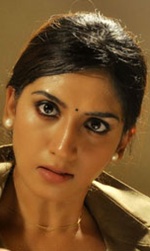 Ayesha, referred to as Lady Bruce Lee by her fans, had charmed the audiences with her breathtaking stunts in her hit debut movie "Jayahe". Now she returns to please her fans through her second film "Chennamma I.P.S". The film has not been taken seriously by critics or fans, but it fast-paced narration and mind-blowing stunts will surprise movie buffs.

Starting from Nadira, who did many action films in Bollywood, there have been scores of female artists who have done action-oriented roles. Top southern actresses like Vijayashanthi, Malashri and Sneha took action route to boost their career.

Other examples include Disco Shanthi and Mumaith Khan who were basically item girls and later tried to make it big with action movies.

A trained karate expert, a black belt holder and winner of many championship trophies, Ayesha shows a marked difference in the way she perfromed her stunts in the movie. Her experience helped stunt directors try new things which certainly look exciting on screen.

Though the punch lines mouthed by Ayesha, who has been doing Telugu and Kannada films, sound similar to what have been heard before, the stunts are entertaining.

Anand P. Raju`s script does not have any fresh elements, but the film manages to create interest because of Ayesha`s energetic performance. Also, the performances of Mandya Nagaraj, P.N. Sathya and Hanumanthe Gowda in negative roles are equally appealing.

Coming to the negative points, the film looks like old wine in an old bottle because of the predictable story. The first half moves fast, but the second half, despite major turns in the story, lacks the curiosity element and it shows the writers did not do their homework properly to justify several sequences in the action drama.

Anand Raju has also not cared to look at the credibility angle in his narration, which is exaggerated at times.

The film starts with a wounded and recuperating police officer Chennamma give details of the incidents where she got injured. She is posted in Ramanagara where rules of Appanna and his cruel son prevail. When Chennamma arrests Appanna`s son, she invites the don`s wrath.

A completely recovered Chennamma decides to take revenge on Appanna and his gang of thugs. How she undertakes her mission to destroy the them forms the rest of the plot.

Ayesha proves that she is very good at stunts. She looks perfectly fit and awesome in her role as a cop. Ayesha will continue to do action oriented roles for a longer time.

Mandya Nagaraj and P.N. Sathya impress as baddies with their stylish dialogue delivery and mannerisms. Other veteran artists too have perfectly suited the roles.

The film has no songs, but Rajesh Ramanath`s background score is neat. The camera and editing work fits into the mood of the film.

"Chennamma I.P.S" is worth watching for Ayesha`s superb stunts.