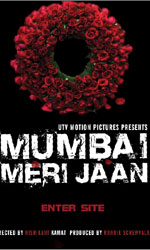 `Mumbai Meri...` an honest attempt to delve into communal psyche

Ratings: **
"Mumbai Meri Jaan" is a sincere attempt to capture the aftermath of the serial bomb blasts in Mumbai`s local trains that ripped apart the city`s lifeline on July 11, 2006, killing 80 innocent commuters and leaving scores injured.

By recounting the individual trauma of a few of those affected, director Nishikant Kamat tries to delve into the genesis of communalism through the everyday life of Mumbai`s common people.

Though Kamat`s objective is noble, he succeeds in his enterprise only partially in terms of communicating to the viewers what he intends to say.

Although the movie ends with Hindus and Muslims of the city regaining their trust in each other, what precedes is a tale of hatred, distrust, helplessness and anguish, a tale which is also about ineffectual police administration, unconcerned and unfeeling about the woes of the common men.

In essence, the underlying theme of "Mumbai Meri Jaan" is to show the city`s mood in the face of odds. But that does not come off on the screen as convincingly as it should have.

Scenes are repetitive and the delineation sketchy. Before one can absorb the mood of a scene, it dissolves into another of the same nature.

Perhaps, by intention, the script has no strong characters, because the writer`s objective is to present Mumbai as a composite character, a city braving the after effects of the blasts.

The only character that stays with the viewers is the one of a Hindu fanatic played by Kay Kay Menon. The actor delivers the goods by his convincing portrayal of man obsessed with his hate-Muslim campaign.

As constable Tukaram Patil, a symbol of decadence in the police department, Paresh Rawal, as usual, acquits himself splendidly. The performance of Vijay Maurya in his role of Sunil Kadam, Patil`s younger colleague, but who is diametrically opposite to him, is praiseworthy.

Soha Ali Khan actually springs a surprise in the movie by giving a realistic performance in a deglamourised role of Rupali Joshi. She plays a TV reporter, who is traumatized by the devastating effects of the train blasts in which she has lost her fiancé. Kamat has extracted the best out of her so far.

R. Madhavan, as Nikhil Agarwal, an IT professional, and Irrfan Khan, as Thomas, a roadside coffee vendor, do the best within the limited scope the script provides them.

Madhavan moons about India`s future and Khan does his best to spite the country`s mall-obsessed middle-class, but why he does so is not clear.

In sum, "Mumbai Meri Jaan" is the director`s tribute to the spirit and resilience of Mumbai and its people. The theme of the movie is commendable, but the narration lacks spontaneity. This is because Kamat wants to tell the story through the lives of too many people, so that, by doing so, he loses the thread here and there.

Nevertheless, the movie is worth watching. A movie like this helps society to introspect, to find its strength and drawbacks. Better still, it helps Hindus and Muslims to understand each other better.

Professionals of the VFX studio, Tata Elexi, deserve kudos for simulating the blast sequences with awesome reality. This one sequence would be enough for the viewers of "Mumbai Meri Jaan" to comprehend the brutality of the murderers, otherwise known as terrorists.

On July 11, 2006 the local train service, known as Mumbai`s lifeline, was struck by a series of bomb blasts. Bombay Meri Jaan explores the impact of this devastating incident on the lives of the people of Mumbai. From a brilliant broadcast journalist to a patriotic corporate man; from a retiring policeman at the twilight of his life to a rookie cop at the dawn of his career; from an angry and xenophobic unemployed young man to a coffee-vendor struggling to survive and belong: Mumbai Meri Jaan follows the lives of people from all strata of Mumbai`s bustling society as they tackle the aftermath of a fatal incident that brings out the best and sometimes the worst in them.