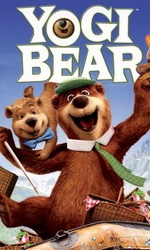 Not all films need to be looked at cinematically. They can be looked, flaws and all, as the way the film wants you to look at it - with kindness and a little attention that will let you know why something is the way it is in the film. And if a film has a heart like this one, it is easy to forget its many faults and appreciate for being a nice, neat, clean, family entertainer.

Yogi Bear (Dan Aykroyd) is the nemesis of Yellowstone Park as he steals food baskets of picnickers. No matter how much ranger Smith (Tom Cavanagh) tries, he just cannot control this talking bear that refuses to heed his natural instinct and be like the way bears are supposed to be. He rather prefers his tie and cap and stealing coke and chips. His attempts to make amend and do good, always seem to fail.

When the major of the town eyes the park so he could make money while destroying the green, lush natural park, it is up to this motley gang, Yogi Beer, his side kick Boo-Boo (Justin Timberlake), ranger Smith and a documentary filmmaker Rachel (Anna Faris) to pool in their bit and save the park.

The weakness of the film is obviously the screenplay. Yet surprisingly, even as the screenplay fails, the dialogues are often extremely witty, though they could have been funnier. The live action adaptation is extremely believable and 3D only enhances the effect.

Yes, it is true that the film could have had a lot more better, that it could have said the same things in a much more intelligent way rather than this direct way that makes it look so dumb that on a scale of one to 10, it would get a two rating. Despite this, it is not without its funny moments and a two pronged message: protect nature and be true to yourself.

Thus, it is not a film for film critics, but for little children who would love the 3D antiques of this bear, his side kick and a helpless park ranger. It is not a film to be seen with an intellect, but with a little bit of heart, to be seen, laughed and if you are too cinematically inclined, forgiven. It is a film that kids will really lap up. Give it to them.