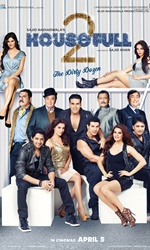 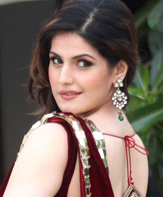 Gags galore. Laughs? Well, not as many as you`d expect in a 180-minute marathon mirth machine. Somehow, the jokes get choked in the comic ritual of repetition. Once you figure out who`s who and who`s ha-ha in the farce fest, the attempts to cram as many characters into every frame as humanly possible begins to take its toll on the comic equilibrium of this tale of intermittent titters and some genuine laughs.

So what`s Housefull 2 about? Wrong question. Beyond a point, it`s only about keeping the embers of satire alive by hook or by over-cook. Somewhere down line the witticism wears thin. But there are comic actors of terrific aptitude holding aloft the thinner segments in the farcical fabric.

Just look at the lineup. Real-life brothers Randhir and Rishi Kapoor on screen for the first time together. Wow wee!Each time they appear on screen the theme from Raj Kapoor`s cinema plays slyly in the background. As brothers turned enemies sharing a wall of history in `Great` Britain, the Kapoor brothers take much longer to thaw and embrace one another than the other actors.

The plot is propelled forward by pairs of hostile actors who come together by the mid-point…Asin and Jacqueline playing blathering bimbos who also happen to be warring cousins, seem to find no pleasure in their characters beyond swooning in their screen-lover`s arms once too often. Akshay Kumar and John Abraham (the former getting the comic timing right, the latter trying so hard the effort shows) hate one another because at their college dance John caught his girlfriend with Akshay in the closet.

Once out of the closet the fun quotient never really stops for Akshay. He is in his rogue`s element running helter-skelter between dacoit-turned-English aristocrat Mithun Chakraborty and his Man Friday Johnny Lever.

The male actors get the sur of the steep satire right. But the ladies, they`re a little lost in the melee of mirth. Asin who has the meatiest role among the girls is listless. Making 25 faces in every frame doesn`t constitute money`s worth acting.

Sajid Khan shoots the ladies in exotic locations. The camera is never voyeuristic. The mood is often slapstick. But the gags never cross the limits of vulgarity. The verbal exchanges are largely free of double meanings. Yup, this comedy could be watched by the family without the dialogue writing band-bajaoing Papa and Mama`s censorial rules.

It is interesting to see how Sajid Khan employs old traditional Bollywood conventions, like a flashback where two friends swear to give away one another`s kids in marriage when the time is right, and an incredibly lengthy and pointless fight sequence where Dara Singh`s son Vindoo jumps out of a wheelchair and gets beaten up by our bunch of belligerent heroes.

Such archaic formula-baazi is synthesized with more contemporary concepts of cinematic entertainment. All in all you come away from Housefull 2 with a feeling that the vast cast seems to get the mood of riotous fun. They seem to have such fun that the audience can`t help getting infected by their non-stop party mood.

Housefull 2 takes the comic vein further than the first Housefull film. Sajid`s plot, characters and situations keep the chuckle fest vibrant and alive till the end. This is at times a wicked and funny farce with sparkling comic talent displayed by every male actor.

Veteran actor Sanjay Dutt has signed up to feature in a multi-starrer comedy entertainer "Blockbuster". He says he loves the comedy space."I have always loved doing comedy. It is the genre that makes me feel at home. The scale of 'Blockbuster' is huge and multi-starrers always connect well with audiences," Sanjay said in a statement.Read More

If the criteria for a film's popularity is the number of trailers of other films shown during release, then "Housefull 2Read More

Housefull 2… The Dirty Dozen is the second super star packed installment in the HF franchise. A completely new story with new characters and a new star cast. HF2 is bigger than its predecessor in every aspect. It is the story of four fathers, four daughters and four prospective son-in-laws and as the second half of the tile suggests, they are the dirty dozen. Each father wants his daughter to marry the richest son-in-law, Each daughter thinks she is marrying the richest son-in-law. Each son-in-law is pretending to be the richest son-in-law. Each character is flawed, unscrupulous and extremely entertaining. The good news for the audience is that none of these people can stand each other and all of them are under one roof, in one house as the first half of the title suggests – HOUSEFULL.