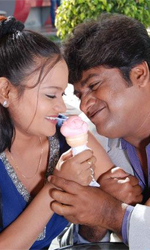 The story of "Rame Gowda Vs. Krishna Reddy" is credited to the producer of the film, while the director takes the credit for the screenplay. But a few minutes into the film, and you will realise that it is inspired by Dibakar Bannerjee`s Hindi film "Khosla Ke Ghosla" - but with cleverly embedded elements that are relevant and peculiar to the real estate dealings in Karnataka. The film, made on a shoe-string budget, has poor production vales.

The film was initially publicised as "Gowda Vs. Reddy", but the name was later changed. Though "Gowda Vs. Reddy" sounds like a political saga but it has no reference to the rivalry between former prime minister H.D. Deve Gowda and Karnataka Tourism Minister Janardhana Reddy.

Director T.N. Nagesh has succeeded in portraying the sufferings and anxiety of a middle-class family victimised by a greedy land-grabber. But he somewhere loses the grip in the second half. Another weak area of the film is its cast. While Rangayana Raghu overacts, Shashi Kumar lacks the intensity the role requires. The music is at best average.

Subbanna is a retired employee whose daughter Roopa wants to go abroad for higher studies. He wants to sell his site acquired through his life savings to arrange funds for his daughter`s education. But Subbanna and his family is shocked to learn that a land shark named Krishna Reddy has already usurped the property. Subbanna`s efforts to get the land back fails on all counts as he finds all the agencies are hand in glove with the land sharks.

Anant Nag delivers a decent performance in the role of Subbanna. Rangayana Raghu overacts, but still provides some comic relief. Roopashri and Roopesh definitely need to sharpen their acting skills. The camera work is just above average.